'I thought out defense was really good today and it was our most mature guys out there that helped calm everybody down'
0
Jan 24, 2020 11:01 PM By: Matt Sookram 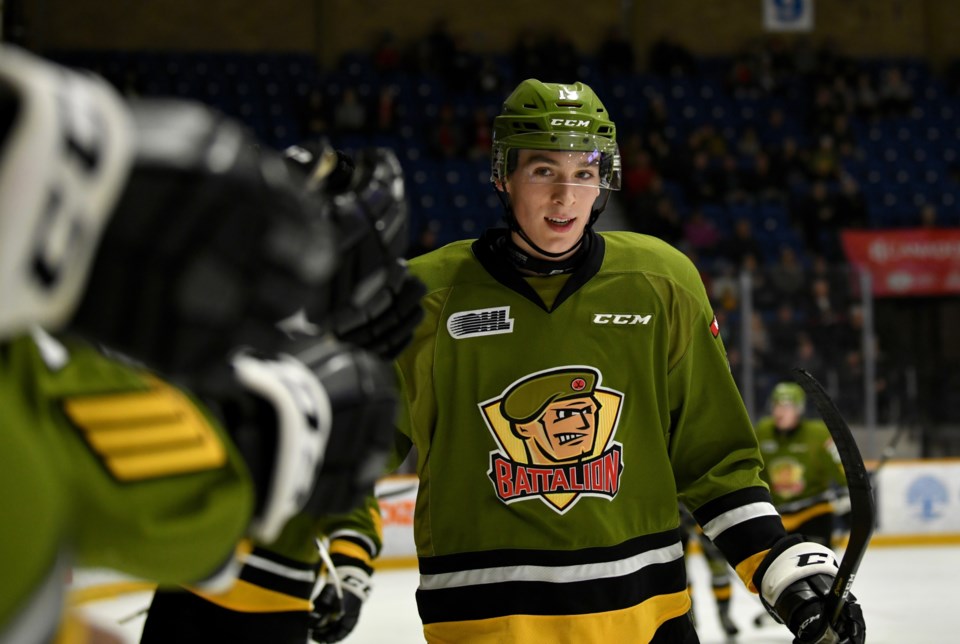 File Photo of Mason Primeau who scored twice in the third period to lead North Bay to a 4-2 win over Sudbury on Friday night. File photo courtesy Tom Martineau/BayToday.

The slow start and the bad bounces that plagued the Battalion 24 hours earlier were non-existent in the rematch with Sudbury on Friday night. The Troops went toe to toe with the Central Division leading Wolves and came out with two points on Friday night with a 4-2 win at the Sudbury Community Arena.

Former Wolves Co-Captain Shane Bulitka got things off to a hot start scoring just 30 seconds into the game, his first as a member of the Battalion and 17th of the season.

“Both my linemates got in on the forecheck and created a turnover and I got the puck right in front, that made it an easy goal,” says the overage Bulitka.

Battalion Head Coach Ryan Oulahen was not impressed with the way his team started the game on Thursday night at home, but with a one-goal lead 30 seconds in that held up through the first 20 minutes, the Troops coaching staff saw the improvement from their squad.

“We got some really solid goaltending to start the game and Joe (Vrbetic) was on top of his game,” said Scott Wray, Battalion assistant coach.

“That’s probably one of the best games I’ve seen him play this year. It’s nice to see how square he was to start and he wasn’t giving up much.”

It was the second straight road start for Vrbetic who was coming off a stellar 28 save performance in a 3-1 win over Niagara one week ago. The rookie netminder turned aside 38 pucks against Sudbury in a strong follow-up and it gives the Battalion their second straight road win, the first time all year that has happened this season.

But the Wolves stuck to their game plan of trying to rush to the loose pucks off the dump ins and getting behind the North Bay defence and the persistence paid off in the second period when Blake Murray (20) scored at 11:59 just as the Battalion power play was ending to make it a 1-1 game.

North Bay responded at the end of the period when Bulitka (18) lit the lamp for the second time with just four seconds remaining in the period to carry a 2-1 lead into the locker room.

The third period started four on four and then when Sudbury got their man out of the penalty box, they took advantage of their shortened man advantage and Blake Murray (21) got his second of the game at 1:15 on the power play.

With the game tied 2-2, North Bay looked to respond and Wray says it was a good push back, led by the teams older group.

“I thought out defense was really good today and it was our most mature guys out there that helped calm everybody down,” says Wray.

That includes third-year forward Mason Primeau who found some empty space on the far side post on the power play and accepted a perfect pass from Nick Grima that went off Primeau’s stick and right into the back of the net for a 3-2 North Bay lead at 7:41 of the third.

“I think the team played well as a whole, it was nice to get a couple tonight,” says Primeau who added to his goal total this season by finishing off the game with an empty net goal at 19:15, his 11th of the year.

“Nice play by Mitchell (Russell) to get the puck towards the empty net, but he gave it over to me and I appreciate that,” says Primeau, acknowledging that his linemate Russell won a battle on the boards in the neutral zone with the Sudbury goaltender pulled. Russell brought the puck over the blue line and with a defender closing in, he flipped it over to Primeau to seal the deal.

The talk after the game was all about bouncing back from a tough defeat at the hands of their division rivals the night before.

“It was nice to get the win against my former team,” says Bulitka. “Glad to get two goals and stick it in their face a little bit. We knew we were in the game yesterday, we just had to buckle down on a couple of mistakes. I think we did a better job today and capitalized on our opportunities."

“We have to have that short memory,” says Primeau. “We play these guys eight times a year and we knew we didn’t play terrible yesterday. We had a few things to clean up, we did that and we’re happy to come out on top.”

Now the team will look to continue that momentum on Sunday when they host their other northern rivals in the Soo Greyhounds.

Wray says, “when you look at the stats sheet, we are the youngest team in the league and it’s all about maturing. I think for these guys it’s all about remembering what it takes to win, and how it feels to win. It’s a lot better to hear the music in the room after the win. I think a lot of guys are learning how hard it is to win games in this league and how competitive it is. It always amazes me how young kids at the junior ages work so hard, winning or losing.”

“It’s just a game of inches,” he adds. “I think right now they are really finding their way in the league. For us to go in on Sunday, we need to have a good effort and a good outcome. The fans deserve it and our team deserves it.”