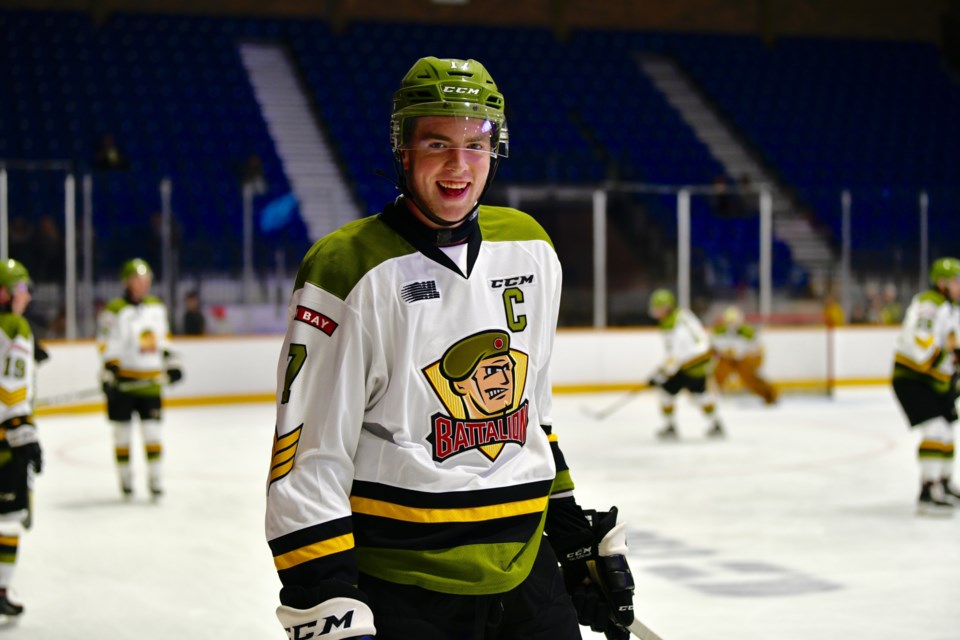 It was certainly a season to remember for Justin Brazeau.

The Battalion 61-goal man had his memorable year come to a halt on Friday night when the Niagara IceDogs eliminated the North Bay Battalion with a 4-0 win in game five to take the series four games to one.

The big New Liskeard native took to social media to say thank you.

“North Bay, thank you! Thank you for four of the best years of my life,” Brazeau stated on social media on the weekend.

“I am so thankful to have been able to finish out my OHL career as a member of the Battalion. To all my amazing teammates I was able to play with over the last four years, thank you for making it so much fun.

“Thank you to the organization and all my coaches for giving me the opportunity to turn into the player I am today. Thank you to all the amazing fans for your continued support no matter what, you guys are some of the best fans in the league.

Brazeau could not forget about his billet family in North Bay.

“The biggest thank you to my amazing billets the Peachey’s for welcoming me into their home, making me feel so comfortable and allowing me to turn into the person I am today,” continued Brazeau.

“I have made so many lifelong friends and shared some amazing memories with them. It’s been a great ride and I wouldn’t have wanted it any other way.”

Justin Brazeau, who won the Jim Mahon Memorial Trophy as the league’s top scoring right winger,  finished second in OHL scoring but led all right wingers with 113 points including a league-high 61 goals along with 52 assists in 68 games.

The 21-year-old from New Liskeard set a new Battalion mark for goals in a season and is one of just three North Bay OHL stars to surpass the 60 goal plateau joining former Centennials Vitali Yachmenev who scored 61 in 1993-94, and Nick Kypreos who netted 62 during the 1985-86 season.

Brazeau became just the second Battalion player to join the OHL’s century club for points in a season following Wojtek Wolski who produced 128 points in 2005-06.  It’s also the first time North Bay fans have seen a 100-point player since Trevor Gallant accomplished the feat by putting up 105 points for the Centennials in 1995-96.

Now the big question is where he goes from here.  Brazeau, who netted one goal in the five-game series against Niagara, was under the watchful eyes of dozens of NHL scouts during play the past two weeks.

Brazeau and Battalion fans should find out soon where his next hockey destination will be.