"We, like George Floyd ... are pleading the Township to stop kneeling on our necks because we can’t breathe, we are suffering because of this.”
Sep 18, 2020 8:00 AM By: Dave Dale 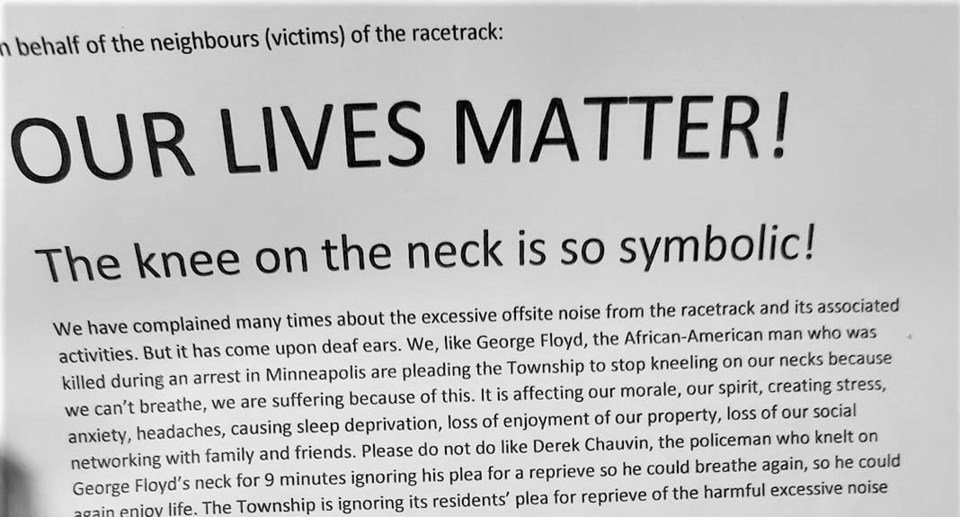 A letter circulated in Bonfield equating drag strip noise to the oppression of BLM and the police killing George Floyd was widely panned on social media Thursday.

Bonfield residents are upset over an unsigned letter circulated through Canada Post that compares drag strip noise to the oppression of black people.

It was posted on the Bonfield Community Watch Facebook Page and quickly panned with members of the group calling it a “disgrace” and “disgusting.”

Only identified as written “on behalf of the neighbours (victims) of the racetrack” the heading is in large capital letters: OUR LIVES MATTER. Below that is ‘The knee on the neck is so symbolic!’

“We have complained many times about the excessive offsite noise from the racetrack and its associated activities,” the letter states. “But it has come upon deaf ears. We, like George Floyd, the African-American man who was killed during an arrest in Minneapolis are pleading the Township to stop kneeling on our necks because we can’t breathe, we are suffering because of this.”

The issue of noise at the track was in the news this week with the Bonfield Event Park hosting its first public drag racing event Friday through Sunday.

The event was on the agenda of the Bonfield Emergency Control Group Tuesday as are all large gatherings planned during the COVID-19 pandemic. Mayor Randy McLaren said they also have concerns about noise mitigation.

Property owner Lisa Groves told BayToday.ca they are following all the recommendations outlined in the last engineer’s study looking at noise impacts. Groves also said they checked sound levels during test and tunes and a small private function this summer and decibel readings were under the limits.

On Wednesday, McLaren told BayToday.ca that their bylaw officer made a site visit “and confirmed everything was in order,” adding that Groves also responded to their written request to confirm noise mitigation was being managed. He said the group members discussed the risk of COVID-19 spread by visiting racers and attendees, although they are limited to 100 spectators with masks and social distancing required.

NOTE: McLaren was interviewed about the issue Friday morning and the follow up story is HERE.

Upset recipients of the letter stated they found it in their mailbox at the Canada Post Office and street mailboxes.

A Bonfield resident with the Facebook handle Shelby Erna Katherine Taylor posted the letter to the Bonfield Community Watch page. Her introduction captured the mood of most who thought the letter-writer was out of line to compare noise issues to the oppression and killing of black people by police: “Who has the nerve to send out a letter like this,” she stated, noting there was no signature. “What a disgrace this person is.”

Canada Post has been contacted and we are awaiting a reply.

BayToday.ca will update this story when the reaction from elected officials is available as well as more information about who wrote the letter. 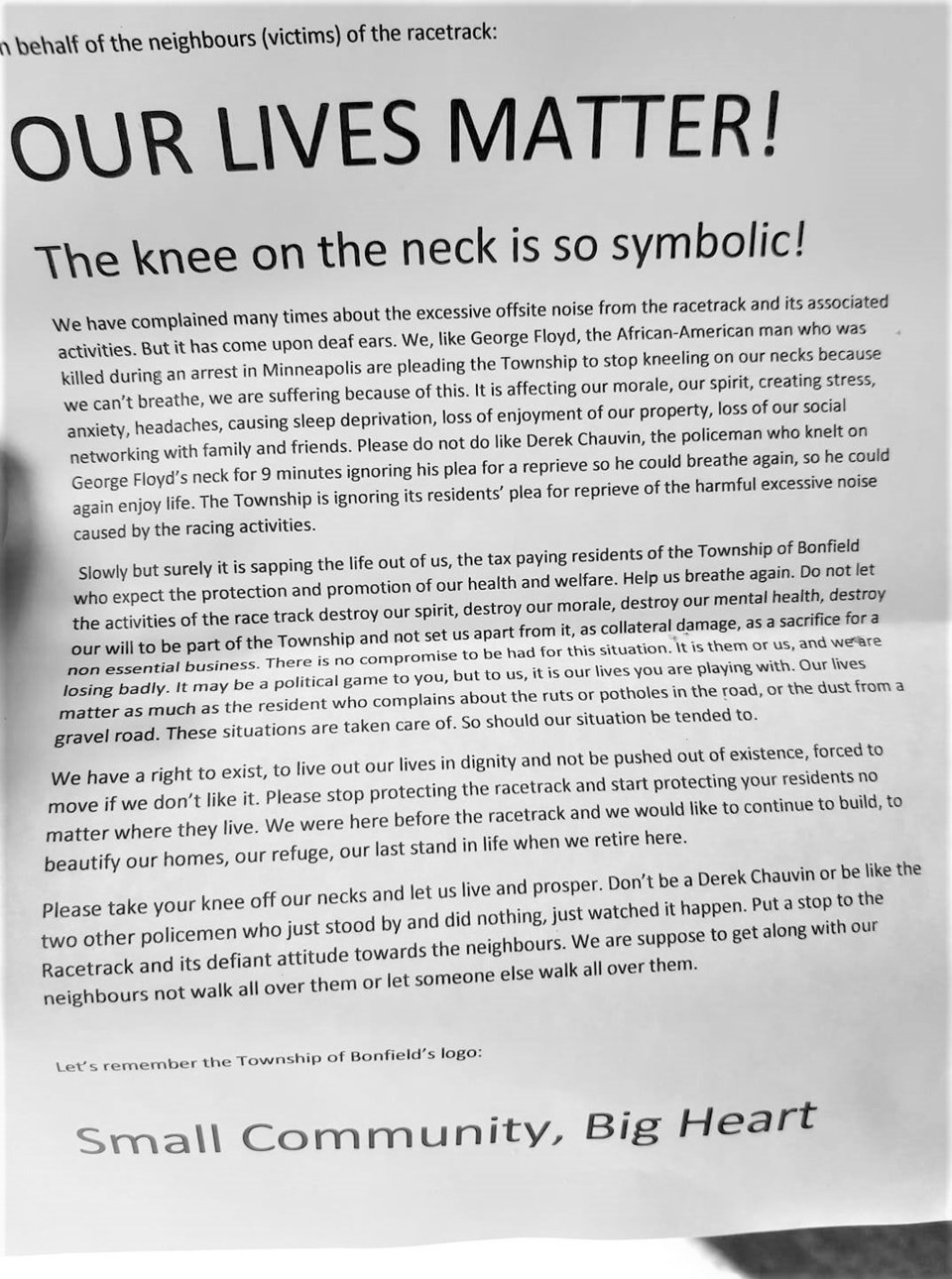 A letter circulated in Bonfield equating drag strip noise to the oppression of BLM and the police killing George Floyd was widely panned on social media Thursday.