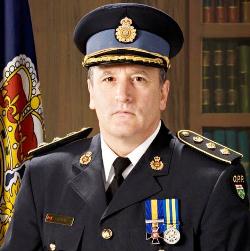 “We undertook a thorough competition process to arrive at this decision and have made an excellent choice. Brad Blair has had a distinguished career with the OPP and I am looking forward to welcoming him as a Provincial Commander, where I know he'll continue to serve the people of Ontario and the OPP well,” said OPP Commissioner Chris Lewis.

Originally from Essex, Ontario, and a graduate of the University of Windsor, Blair is currently the Commander of the OPP’s Central Region, but will transition to his new role in the near future as one of four Provincial Commanders supporting Lewis.

A 27-year veteran of the OPP, Blair began his career in the far north at the Red Lake and Sioux Lookout Detachments and went on to hold a variety of command positions with increasing responsibility. In 2011 he was promoted to Commander of Central Region after serving for several years as Commander of the Aboriginal Policing Bureau.

As Provincial Commander, Blair will assume responsibility and oversight for all OPP traffic programs in the province, the Communications and Technology Support Bureau, the Security Bureau which oversees all corporate and dignitary protection and the Field Support Bureau which is charged with all major event planning.

“My career with the OPP has continuously challenged me as a police officer and a leader. I am excited about the future and humbled by the responsibility,” said Blair.

Cross Nipissing swim planned for July by hall of fame swimmer
Feb 19, 2020 4:00 PM
Comments
We welcome your feedback and encourage you to share your thoughts on this story. We ask that you be respectful of others and their points of view, refrain from personal attacks and stay on topic. To learn about our commenting policies and how we moderate, please read our Community Guidelines.