Battalion won't be aggressive sellers at the trade deadline 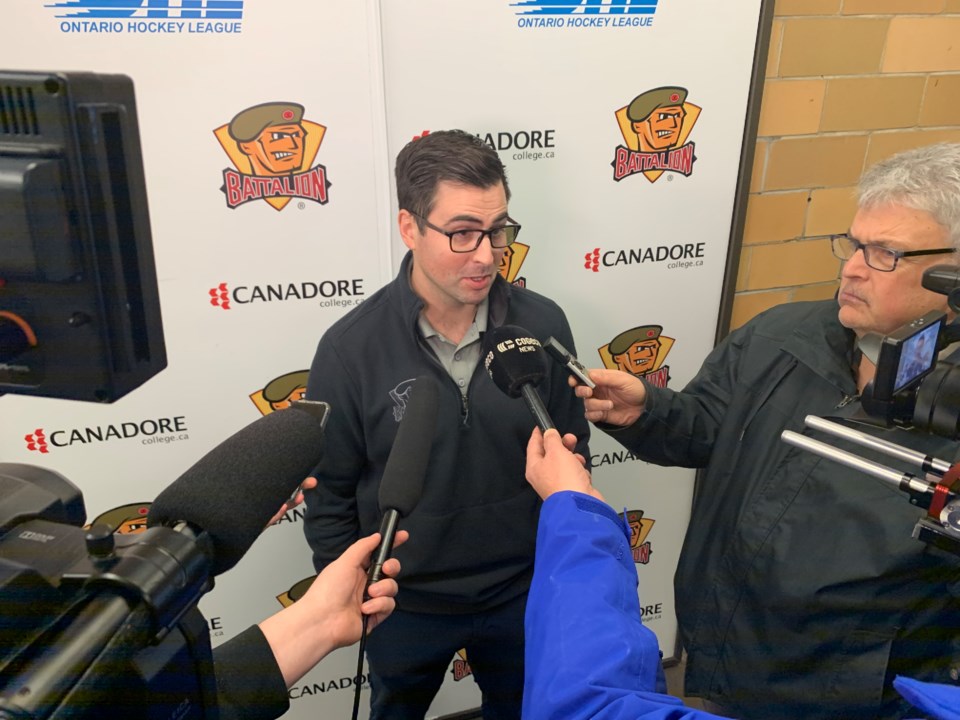 Battalion GM Adam Dennis speaks to the media on Wednesday afternoon about the trade deadline. Photo by Chris Dawson/BayToday.

The North Bay Battalion GM Adam Dennis says he will not be an aggressive seller as the OHL trade deadline looms on January 10.

“We are going to be listeners,” said the rookie GM.

“There is no conversation we will not be a part of. Everything we do is going to be the idea that the future is at the forefront for our team.”

The Battalion, sporting a 9-27-2 record and last in the Ontario Hockey League, hope to be getting some help overseas as Dennis confirmed that 2019 1st round import selection Martin Hugo Has is coming over to North America and, at least temporarily, will be with the North Bay Battalion.  However, how long he is here is the question. The 2019 Washington Capitals third-round pick finished off a successful stint with the Czech Republic team at the World Juniors.  He would certainly bolster the young Battalion blueline and a team that is 4-4-2 in its last 10.

"Hugo has decided to come to North America for further development and develop his career for a chance to have an NHL career so we are happy to help with that process but there is still a lot to sort out before Thursday's game though,” said Dennis.

One topic of many OHL rumour sites has been Luke Moncada. The 19-year-old leads the team with 20 goals and is having a breakout season.  No doubt Dennis is already fielding calls about the hard-working forward.

"I do not think you can take too much from the rumours on the websites," said Dennis.

"I think more than anything that's a compliment to Luke, the fact that there would be interest is the credit to the work that he has put in for the year that he has had. I would argue that he is the most improved player in the OHL this year and the amount of things he does for us is so important so not a priority for us to move him."

The Battalion still has one contest before the deadline as they host the visiting Mississauga Steelheads who sit in the eighth and final Eastern Conference playoff spot currently with 33 points.