'This is the most amazing accomplishment to date for the steps I need to make towards my future goals'
Mar 5, 2021 12:00 PM By: BayToday Staff 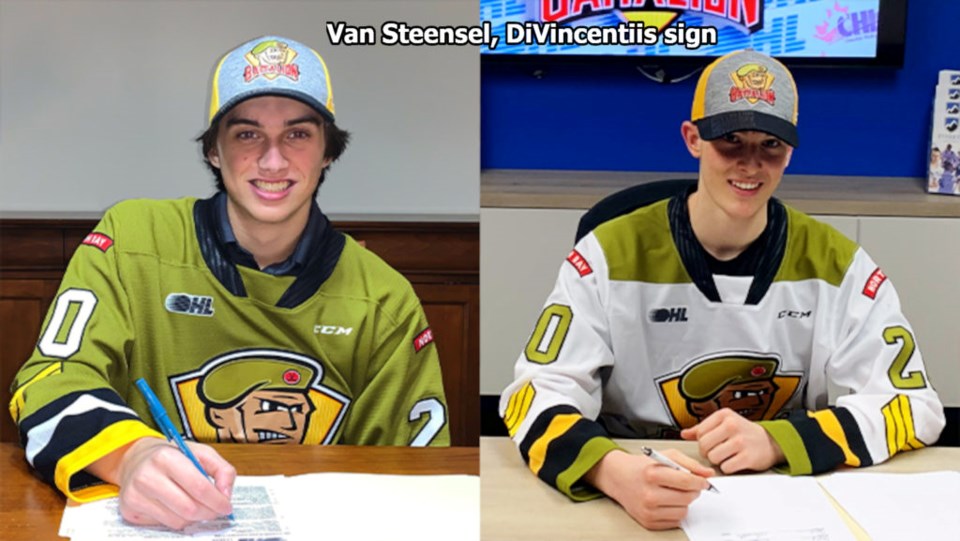 The North Bay Battalion inked a pair of prospects from the 2020 OHL Priority Selection.

Van Steensel and DiVincentiis were fourth- and sixth-round picks in the OHL Priority Selection last April, from the Elgin-Middlesex Chiefs minor midgets and the Vaughan Kings minor midgets respectively.

While the OHL has yet to start play in the 2020-21 season because of the COVID-19 pandemic, the signings brought to five the number of players selected last year who have signed with the Battalion, following defenceman Ty Nelson, the No. 1 overall pick, second-round centre Dalyn Wakely and third-round rearguard Tnias Mathurin.

“I’m honoured to be given this opportunity to be a part of such an amazing organization and play in front of such a great fan base,” Van Steensel said in a Battalionhockey.com release.

“I’m excited to take the next step in my career with the Battalion and can’t wait to get things started and meet my new teammates.”

He had one goal in two games with the Komoka Kings of the Greater Ontario Junior Hockey Jr B League, and has been recently skating with the St. Mary's Lincolns, Jr. B squad.

“With Owen, you get a player with a high hockey IQ and a great mix of speed and skill,” said Battalion general manager Adam Dennis.

“He was a captain on one of the top minor midget teams last season and has been able to show quite a bit of growth through his offseason training and the limited sessions he was able to attend with his junior B team in St. Marys.”

In 21 games with Vaughan last season, DiVincentiis, a six-foot-two, 180-pound native of Toronto who turned 17 Thursday, posted a goals-against average of 1.58, a save percentage of .954 and seven shutouts while winning 13 of 18 decisions.

He was one of three goaltenders taken in the 2020 OHL Priority Selection who was chosen to participate in Hockey Canada’s virtual national under-17 development camp.

“This is the most amazing accomplishment to date for the steps I need to make towards my future goals,” DiVincentiis said in a release.

“Being drafted and now signing with the North Bay Battalion makes me excited, happy and super pumped. Thank you to my family, coaches and everyone who has helped me to get to this point in my hockey career. Go, Troops, go!”

Dennis, a former Buffalo Sabres goaltending prospect says DiVincentiis has already garnered attention from Hockey Canada and may be one of the top netminders in his age group.

“He’s a big-game goalie with great focus and athleticism and is always looking for ways to improve his game," Dennis noted.

"Like Owen, Dom has really put great effort into his off-season program and has seen significant gains."

“Both of these players are guys that Battalion fans will get to know and enjoy for several seasons to come at Memorial Gardens. We’re proud to welcome both Dom and Owen and look forward to having a hand in their development.”

Dennis confirmed to BayToday that both newly signed players would be eligible to join the Battalion if a shortened season begins.

The Battalion like other OHL clubs are still awaiting news from the league and the province if a short season will take place this spring.