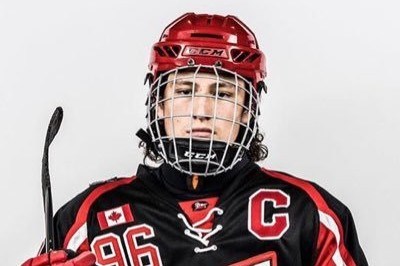 Battalion select Dayln Wakely in the second round of the OHL Priority Selection. Photo courtesy Twitter.

The North Bay Battalion had to wait until the 30th spot to select forward Dayln Wakely from the Quinte Red Devils in the second round.

OHL sources tell BayToday that Wakely was considered to go as high as top-five in today's OHL Priority Selection which started at 9 a.m. this morning online.

The captain of his minor midget squad netted 30 goals along with 42 assists for 72 points in 36 games with the Red Devils last season.

Wakely responded to the selection this morning via Twitter.

"Let's go North Bay!!! Super excited to get rolling with you guys," Wakely stated on Twitter.

Batallion GM Adam Dennis says he was thrilled to see Wakely still available in the second round.

"We did not think he would be there at 30," admitted Dennis.

Dennis noted that he believes the top two minor midget teams in the province were the Ty Nelson's Toronto Junior Canadiens and Wakely's Quinte Red Devils.

He believes those two Battalion picks were the top players on their respective teams.

"Getting a guy like Wakely in the second round is special, it is a very deep draft and I think you will see that down the road."

Prospect Pipeline describes the 5'11", 164 pound forward as an intimidating force to go up against.

"Wakely has consistently dominated his competition all over the ice," stated Prospect Pipeline in its report.

"Showcasing immense strength, he can level opponents with powerful open-ice hits, or effectively separate them from the puck along the wall. With a heavy shot, an electric release, and creative hands, Wakely can light the lamp in a multitude of ways.

"Wakely’s impressive attributes were enough to catch the eyes of Jr. A brass, as he made his OJHL debut in September of 2019. With the Red Devils being a heavy favourite in the ETA, Wakely will undoubtedly be a name to watch for heading up to the 2020 OHL Draft and beyond."

Of course yesterday, the Battalion made the first pick in the OHL Priority Selection by taking offensive defenceman Ty Nelson.

With the first pick in the third round, 41st overall, the Battalion selected defenceman Tnias Mathurin from the Ajax-Pickering Raiders. The 6' 1.5" 190 pound defender had seven goals along with 12 assists for 19 points in 35 games with the Raiders last season.

OHL Central Scouting describes Mathurin as "a responsible shutdown defender who likes to play against the other team’s top line."

Mathurin also went to Twitter to express his draft excitement.

"I am excited to be part of the Battalion organization and I can't wait to get started."

The Battalion added a left winger with the 63rd pick as they selected Owen Van Steensel from the Elgin-Middlesex Chiefs.

With the 70th selection, the Battalion selected forward Michael Podolioukh from the Toronto Junior Canadiens.

After the fifth round break, the Battalion continued into the sixth round where they selected goaltender Domenic DiVincentiis from the Vaughan Kings.

According to Prospect Pipeline, the 5'11.5" and 158 pound goalie was one of the top goalies eligible

"Dominic DiVincentiis is an athletic and tactile netminder who patrols his crease with poise," stated Prospect Pipeline in its report.

"Of improving size, DiVincentiis features impressive lateral mobility and the ability to make highlight-reel saves with remarkable consistency. Perhaps the most impressive feature of DiVincentiis’ game is his puck-tracking, as the youngster can fight through traffic and track shots extremely well — a reality which allows him to stand one step ahead of his opposition."

In the eighth round (141 overall), the Battalion went back to the Toronto Jr. Canadiens program once again selecting centre Kyan Haldenby.  The 5'11" 146 pound forward had 12 goals and 13 assists for 25 points in 33 games with the Canadiens last season.

In the ninth round (161 overall), the Battalion took forward Rodion Tatarenko, who is of Russian descent, but played minor midget with the Toronto Jr. Red Wings last year where the 6'0", 165 pound forward collected 13 goals and 13 assists for 26 points in 31 games last season.

In the tenth, the Troops went after a big defender from Pennsylvania in the form of Gus Hinkley. The left-hand shot defender is listed at 6'3" and 185 pounds.  In 56 games with U15 Detroit Honeybaked, Hinkley had 6 goals and 18 assists totalling 24 points in 56 games last season.

With their second tenth round selection, the Battalion took right winger Dawson Hettiarachchi from the Whitby Wildcats. The 5'9", 139 pound forward put up some big numbers with the Wildcats netting 18 goals and 28 assists for 46 points in 36 games.

In the 11th round, the Troops selected Max Seguin, a 5'9", 171 pound left winger with the Toronto Nationals. The Ottawa native had 12 goals and 13 assists for 25 points in 32 games with the Nationals last season.

In the 12th round, the Troops selected the first North Bay player in Brett Richardson from the minor midget AAA Trappers.

"He has good size, works hard and has some creativity to his game," one OHL scout told BayToday when describing Richardson.

With the first selection of the 13th round the Battalion took defenceman Patrick Wrzesinski from the Toronto Titans. The New Jersey product is listed at 5'11" and 170 pounds.  He had two goals and six assists for 8 points in 32 games with the Titans in 2019-20.

In the 14th round, 261st overall, the Troops went back to the Toronto Nationals to select forward Sett Ursomarzo.  The forward had 17 goals and 14 assists for 31 points in 35 games with the Nats this past season.

With the Troops final selection at 281, the Battalion took big right winger Vincenzo Baiocchi from the Toronto Marlboros.  The 6'0", 185 pound forward had eight goals and eight assists for 16 points in 33 games last season with the Marlies.