“They are one of the preseason favourites and then the next night we go in to Flint and then we head back in to the Soo and I’m sure they want to take one from us.”
Oct 17, 2019 4:00 PM By: Matt Sookram 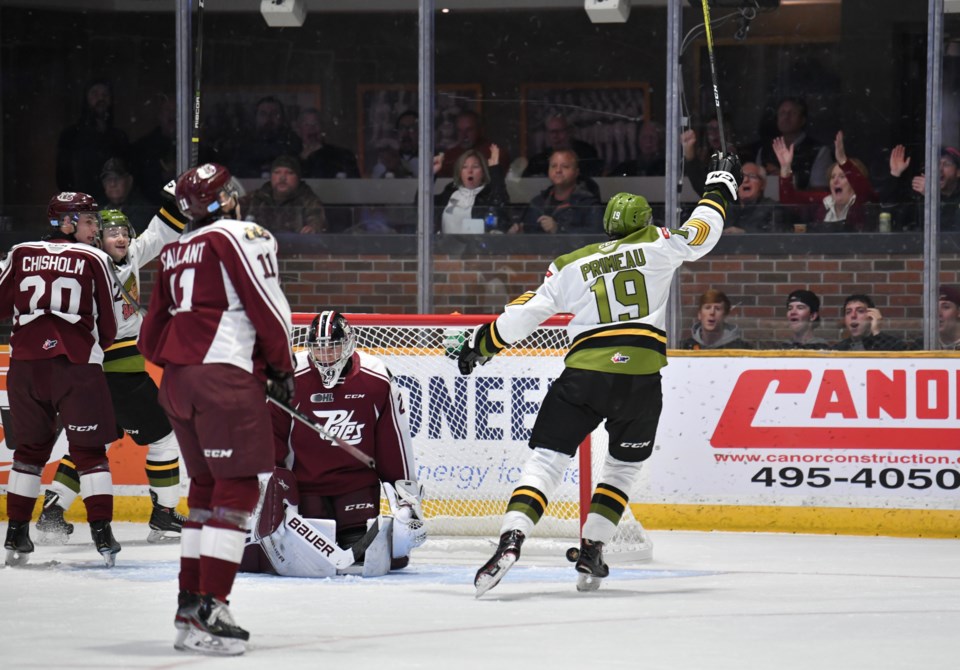 Through the first nine games of the season, there has never been a question of whether this team is working hard or if they can compete. That has been evident right from the drop of the puck for the 2019-20 season. It’s been a matter of putting it all together for 60 minutes and getting the desired results.

For the North Bay Battalion, the results have been there the last two games with victories of 8-2 over Niagara and 7-5 over Sault Ste. Marie in the span of three days last weekend.

“We just keep throwing our young players out there and allow them to play and develop and we’re seeing that they are getting better and better every game.”

The group of players expected to score is also rounding into shape now, reflective in the stats sheets over the last two games. Mason Primeau, Luke Moncada, Brandon Coe, Brad Chenier, Mitchell Russell, and Matthew Struthers all got goals over the last few games, with Struthers getting a hat trick in the 7-5 win over the Greyhounds on Thanksgiving Monday. It was the second straight multi-point game for the Milton, Ontario native and the second hat trick in his OHL career. He also added a pair of assists for a five-point game, just one shy of his career-high.

Still, Stan Butler continues to expect success out of his more experienced crew, though that isn’t a large group to choose from. He says, “There’s no doubt about that (we want the older guys contributing) but we don’t have a lot of older guys. If you take away our two overagers we only have one 19-year old forward on the team. So it’s pretty important that Struthers and Chenier and Moncada are good every night because we need them to be good if our team is going to be good.”

Special teams also need to be good in order for a team to have a successful season and over the last two games, the power play for the North Bay Battalion has gone 7/10 including a North Bay franchise-record five powerplay goal performance against the Greyhounds. The success has come immediately after switching up the powerplay units to have five forwards on the top line, all who have the ability to score in Struthers, Chenier, Coe, Primeau, and Russell. All five have at least one powerplay goal in that stretch.

“I just watched (Assistant Coach) Scott Wray working really hard with our powerplay in practice and I said to him, we have to score on our powerplay,” says Butler. “So let's try this, lets put five forwards together. We’re probably going to give up some short-handed goals but I think in the end, our power play will be better for it.

“I guess making the decision as a head coach to go with five forwards, you open yourself up to some criticism,” he continues. “But I figured it was a good time to give people something to talk about and so we’ll throw five forwards out there. It’s like playing a shotgun offence in football, obviously, we’re going to do it and we’re going to try and score goals. If we give up some along the way, we’ll take those chances.”

The Battalion has only given up two shorthanded goals to this point in the year, one in the very first game of the season to Barrie, the other in an 11-3 defeat at the hands of the Sudbury Wolves, back on September 27.

The Battalion themselves has scored three shorthanded goals, all thanks to Luke Moncada, who is currently the league leader in that category going into Thursday night.

Butler says, “When you can score that many shorthanded goals when you are sometimes, what we call speed challenged, it’s pretty impressive for the young man that he is.”

The team embarks on its first long road trip of the season, three games in a two and a half-day swing that will see them take on Saginaw on Friday, Flint on Saturday and, for the third time already this season, the Greyhounds on Sunday afternoon. And while the kilometers are always tough to overcome on these trips, the level of competition can’t be glossed over either.

“We’ll need to play a really strong game, they are a very talented team,” says Butler about the Spirit. “They are one of the preseason favourites and then the next night we go into Flint who just made a big trade for an older defenceman (Owen Lalonde from Guelph for Michael Bianconi and four picks, two of those conditional), and then we head back in to the Soo and I’m sure they want to take one from us.”

Going into the weekend's action, Saginaw sits at the top of the Western Conference with a 6-4-1-0 record for 13 points (tied with Owen Sound and Kitchener). Flint, with a record of 5-2-0-0 was an honourable mention in the CHL Top-10 rankings and the Soo, at 5-4-1-0 has 11 points and has managed 11 goals against the Battalion in the two head to head games so far, albeit with a record of 1-1.

This trip comes just ahead of the Pinty’s Grand Slam of Curling event that will take over Memorial Gardens for the next week, starting on Tuesday.

Butler says this trip will allow the team some bonding time but they are also excited for the city to have a big event at Memorial Gardens. He says, “This was a vision of Al McDonald, Peter Chirico, and Jerry Knox when they invested the money into this rink that it would allow them to get other events. Although, any time you take a risk and invest money in something you always want to see a return and this is the second great curling event that we’re getting here. I know as an organization, we’re very happy with the renovations done here and the fact that it can house what should be an amazing curling event.”

And while the city will welcome in some of the top curling teams in the world for the event, their boys in pickle green will look to become road warriors and bring home some points as they continue to develop a young team that is continuing to show signs of exciting promise, every time they step on the ice.

“I just told them it doesn’t matter who we play or when we play them,” says Butler. “We just have to go out and make sure our work ethic is strong and that we play our game. I think that’s the biggest thing for our young guys right now is that they get accustomed to the OHL and play the style that they need to play."