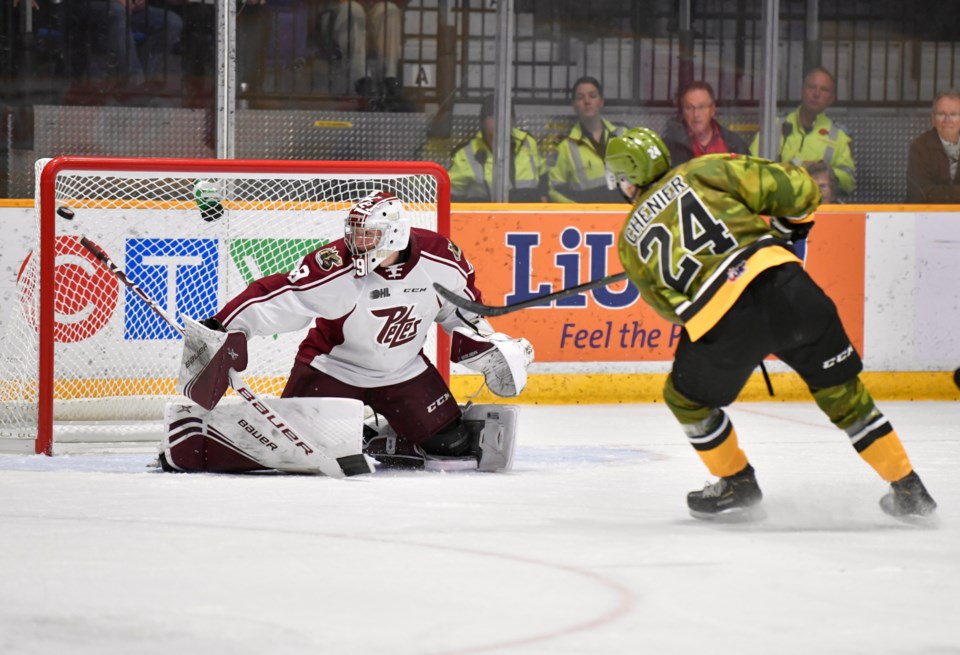 Brad Chenier scores one of the three goals in a loss to Peterborough last Sunday. Photo by Tom Martineau/BayToday.

Stan Butler has been through some tough times with the Battalion organization.

But not since the expansion season of 1998 when Jason Spezza was playing for the Troops, has the Battalion got off to such a slow start.

The team is on a seven-game losing streak and has its hands full this weekend on the road as they travel to London on Friday, Windsor on Saturday and Sarnia on Sunday.

This funk has not been easy for Battalion bench boss Stan Butler, but he says getting back to the win column starts with hard work and consistency from minute one to minute 60 or beyond.

“I could pick different situations like we are in Guelph and its 3-2. The last 20 seconds of a period they score and it’s 4-2 and in the third period we don’t look like the same team.”

Butler knows this is a learning experience for his young squad and he hopes this adversity will make the team better in the long run.

“We’ve got to keep working on it and stay with the process,” he said.

“The kids are working hard in practice, and the biggest thing we tell them is we’re a young team, it’s going to take us a little while to get where we want to go, but eventually it’s going to click in and we are going to be fine.”

The Battalion has a won-lost-extended record of 3-13-0 for six points, fifth and last in the Central Division. London, which has won its last three games, is 8-4-2 for 18 points, third in the Midwest Division.

With Brandon Coe sitting out the second game of a slew-foot suspension, the Troops have recalled forward David Campbell from the NOJHL’s Blind River Beavers to join the team on the road this weekend.  Campbell has one assist in four games with the Troops so far this season.