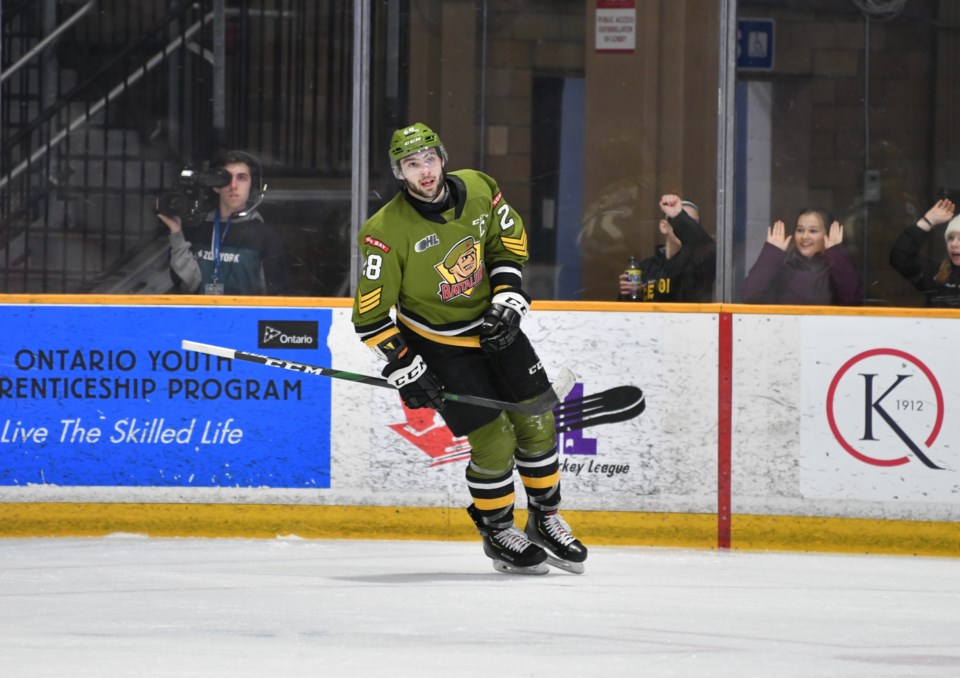 Moncada, who was named most outstanding player, won voting for the Don (Hockey) Hadley Memorial Award as the fans’ favourite player.

Captain Moncada, a resident of Toronto, turns 20 on May 29. He was a third-round choice of the Guelph Storm in the 2016 OHL Priority Selection and joined the Battalion in a trade June 27, 2017.

Moncada had a breakout season offensively going from only nine goals in 2018-19 to 34 goals in the unfinished 2019-20 campaign.

Simon Rose was named the Troops’ defenceman of the year. The North Bay native, a second-round pick in the 2017 OHL Priority Selection, turned 19 on March 23.

Shane Bulitka, who turns 21 on July 9, was selected the top overage player. A resident of Ilderton, Ont., the centre and left winger was acquired in a Jan. 9 trade with the Sudbury Wolves, who chose him in the second round in 2015.

Goaltender Joe Vrbetic was named rookie of the year.

The 2018 second round pick turns 18 on Oct. 24 and had a strong finish to the season where he finished with 14 wins along with a pair of shutouts in his first OHL campaign with the Troops.

Defenceman Braden Henderson was selected as the most sportsmanlike player. The Baxter, Ont., resident, who turns 20 on Thursday, was a sixth-round selection in 2016 by the Sarnia Sting. He joined the Troops in a Jan. 6, 2018, trade that sent Cam Dineen to Sarnia.

Henderson finished the year with only 30 penalty minutes in 48 games with the Battalion.  He also chipped in offensively with two goals and 13 assists for 15 points.

Rearguard Pacey Schlueting was the scholastic player of the year, winning the Judy Smith Award, named for the Battalion’s onetime academic adviser. A North Bay native who turned 18 on Jan. 2, Schlueting was the club’s first-round choice in the 2018 OHL Priority Selection.

Defenceman Nick Grima took the Jerry Callaghan Memorial Award as humanitarian of the year. Grima, a Toronto resident who turned 21 on March 7, was a second-round selection by the Peterborough Petes in 2015 before being traded to Sarnia. He joined the Troops in a trade last Oct. 7.

Award winners usually are recognized before the Battalion’s final regular-season game, but that was one of six dates cancelled because of the coronavirus pandemic.