'We would certainly love normal but I think we all understand that normal is not going to happen but we are all chomping at the bit to get back and get playing'
Oct 29, 2020 1:00 PM By: Chris Dawson 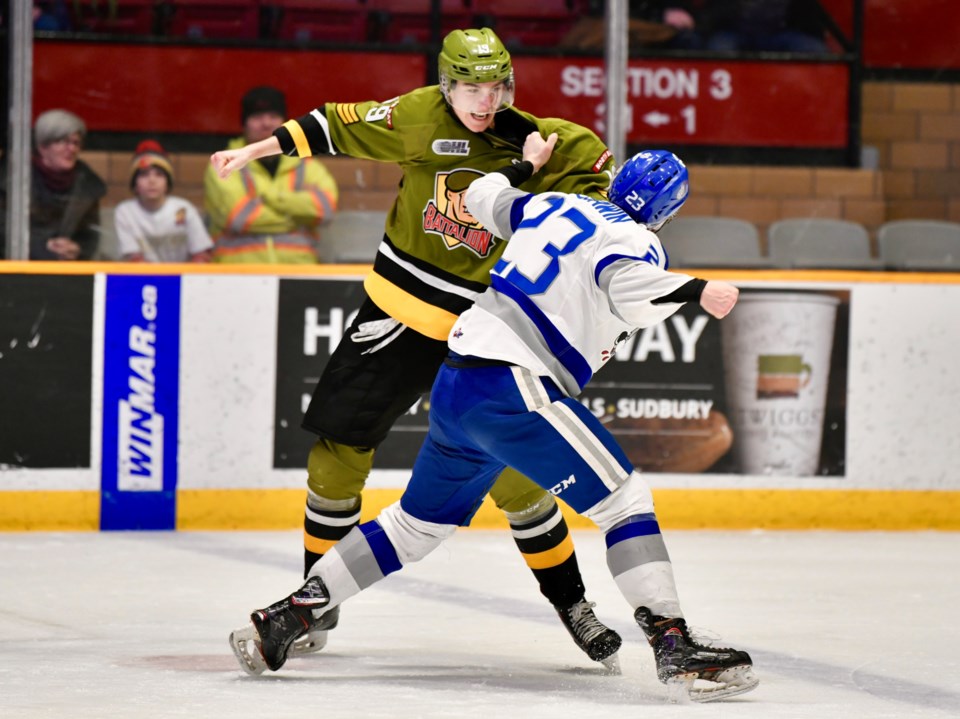 Battalion and Wolves are expected to tangle a lot in new OHL regular season set for February 2020. File photo by Tom Martineau.

Adam Dennis is not complaining about the news that the Ontario Hockey League will begin its new season in February.

"It did not come as much of a surprise based on all the things that we had been hearing," said Adam Dennis, Battalion GM, about the news.

"We heard the whispers but the one thing we have been saying is you can only control so much as a hockey player and there is a lot that cannot be controlled right now. It is nice to certainly have a date and we are grateful for that."

The Ontario Hockey League today announced an updated timeline on its Return to Play plan for the 2020-21 season as the major junior league continues to work with government and health agencies to finalize a safe return to the ice.

“Although we are eager to get back on the ice, the safety and well-being of our players, staff, officials, tremendous fans and communities remains paramount,” said OHL Commissioner David Branch in a release.

“We remain committed to providing our players with a safe, first-class development experience as they pursue their professional and academic goals, and we look forward to the planned opening of our Regular Season on Thursday, February 4.”

Under the new timelines, OHL Training Camps are scheduled to commence on Saturday, January 23 in preparation for the 2020-21 Regular Season that will feature a 40-game schedule running from Thursday, February 4 through Saturday, May 8. Teams will play primarily against opponents in their geographic region in an effort to reduce travel in consideration of the health and safety of all players and staff.

The League says details concerning the structure of team alignment will be made available upon release of the 2020-21 OHL Regular Season schedule.

Dennis says the players realize this is will be a far from a normal training camp.

"We would certainly love normal but I think we all understand that normal is not going to happen but we are all chomping at the bit to get back and get playing," he said.

"On our calls we have expressed that there is not as much of a runway when you get here to training camp so you have to make sure you are doing those things to come ready."

Back in early August, the OHL announced that it was planning to return to play on December 1, 2020, subject to ensuring that the players, fans, staff and community are able to play and attend games safely.

The release did not mention whether fans will or will not be permitted to start in February.

"That was not brought up at this point but it is a very fluid situation so it will probably be an ongoing topic as we move towards that January date," said Dennis.

Dennis adds there is nothing official from the league relating to when and how international players such as 2020 CHL Import first overall selection Matvey Petrov, Matvey Guskov and American Avery Winslow can arrive.

"It is another one of those fluid situations but we are confident that the league is on top of all of these issues and I think this date is reflective of the confidence the league has for us to have our full team at that time," said Dennis.

"There has been a lot of excitement in this off-season with a couple of first overall picks, a couple trades," said Dennis.

"I just think the thing from our group is there is a real sense of urgency. Guys are really chomping at the bit to get going and continue off where we ended our regular season and that has been a nice motivator for our players."

NOBA Entrepreneur of the Year counting his blessings
Dec 4, 2020 2:00 PM
Comments
We welcome your feedback and encourage you to share your thoughts. We ask that you be respectful of others and their points of view, refrain from personal attacks and stay on topic. To learn about our commenting policies and how we moderate, please read our Community Guidelines.