Another Primeau prepping for the NHL Entry Draft

Mason looking to become the fourth Primeau to be drafted into the National Hockey League
Jun 19, 2019 2:00 PM By: Kortney Kenney 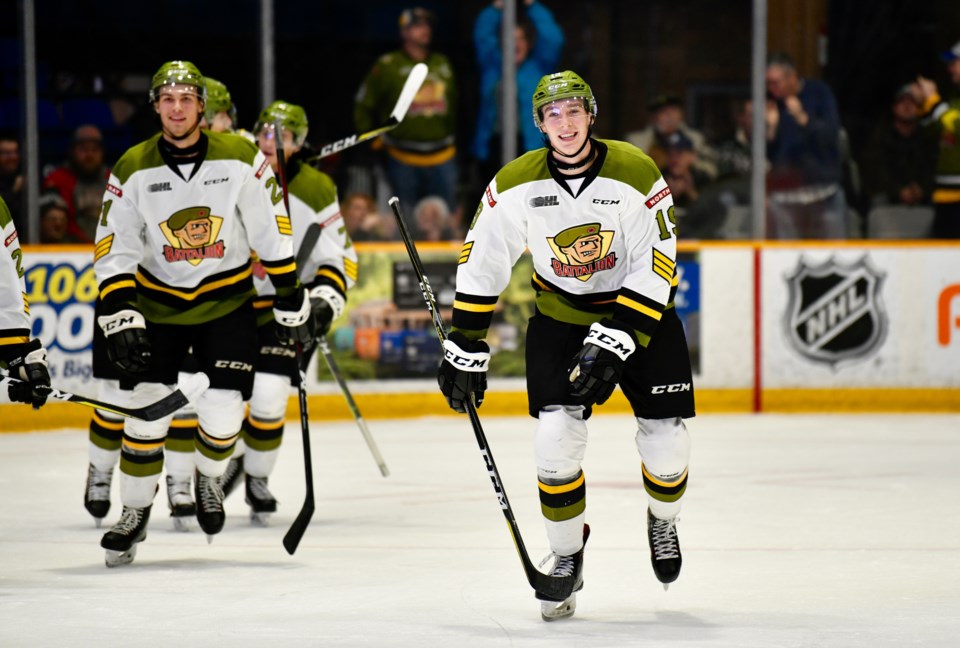 Late teenaged years are a tumultuous time in anyone’s life, what with schooling, trying to figure out what you want to do for a career, friendships, and relationships.

For North Bay Battalion forward Mason Primeau, his future career could come more into focus this Friday when the NHL kicks off the 2019 Entry Draft in Vancouver.

“It’s a little nerve wracking,” the soon to be 18-year-old said through a phone interview as he goes through one of the most exciting weeks of his life.

“You look forward to it for all of your life, but you’re not too sure of what to expect. For me, I’m just trying to keep to my routine and work outs, wait until Saturday and hope for the best.”

“He is a guy that I think a lot of teams would consider in the draft,” Battalion assistant coach Adam Dennis said.

“What’s important to remember is these kids are seventeen, eighteen years old and it is a long road from there. Whatever happens, I think Mason has a bright future and we have only seen him scratch the surface of what he can do.”

Ranked 113 overall by NHL Central Scouting for North American players, the six foot five forward who wears number 19 for the boys in green, was acquired from the Guelph Storm in a mid season trade on November 15th, 2018.

“I thought he had a breakout season.” Dennis said.

“He came from a Guelph team that was stacked with older players and that can be tough for a younger guy. We were thrilled to get him and as soon as he came over he had an immediate impact. I thought the leaps that he took was just a fraction of what he going to do in the next couple of years here.”

“I was looking for a bigger opportunity in my draft year and not just that, but beyond as well,” a candid Primeau said.

“Stan Butler did a great job with me when I came over and he provided me with an opportunity and I know that it was up to me to make good on it. There were times that I wish that I produced a little bit more throughout the year but I think I did pretty well with it.”

Mason and his family will not be traveling to Vancouver to take in the draft, so his potential NHL draft call would come through his cell phone.

A lot of these players like to say they weren’t paying attention or didn’t know the draft was happening and were sitting on the green at the 18th hole, but that won’t be the case with Mason.

“We’re probably going to watch, my parents, brother and sister. If not, I’ll sit around and maybe wait for a call but it can get a little tedious if you’re sitting there and we will see how it goes.”

Of course, Mason can get a lot of family NHL draft advice. His father Wayne was taken 17th overall by the Sabres in the 1994 NHL Entry Draft, while Uncle Keith was taken third overall by the Red Wings in 1990, and his first cousin Cayden Primeau was a 7th round pick of the Canadiens in 2017.

His dad Wayne says the pressure and hype behind the NHL draft is much different than what he and Keith went through in the early 1990's.

“It is a lot more different from when I played and my brother played in terms of the social media aspects all that stuff, he tries to stay away from it and not read into that kind of stuff,” said Wayne Primeau in an interview earlier in 2019.

Of course if he doesn’t get picked, he can still enter the draft again next year, or take the route of that his teammate Justin Brazeau took this season, signing a contract in his overage season.

“I did talk to 'Braz' a bit about his contract situation, but for me, as soon as I got to North Bay, I could see how good of a player he was. He scored 61 goals so it was pretty amazing to see how long it took to get a contract. I just hope that there is one team come Saturday that likes my game enough to take me in the draft and my goal from that point on is to prove them right.”

The NHL draft starts Friday, June 21 and runs through Saturday, June 22, and it’s safe to say that a lot of the seventh man will be waiting along with Mason. Of course if he gets picked, the celebration could last most of the summer.