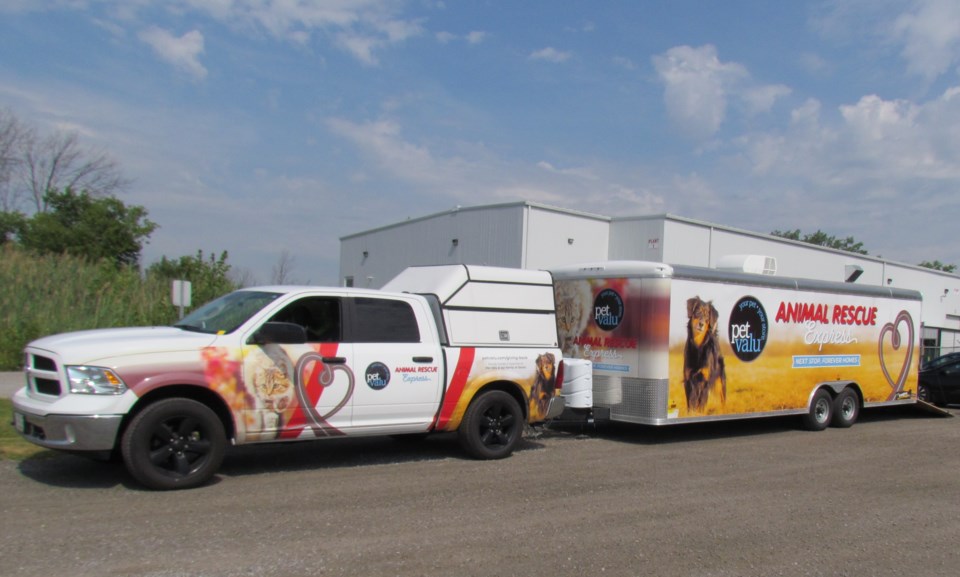 A new vehicle which is like the Noah’s Ark on wheels is gaining popularity across Ontario.

The Animal Rescue Express is a large truck and trailer based out of North Bay that can pick up and deliver distressed animals in a comfortable environment.

Outfitted with comfortable, modern cages, air conditioning and heating, the Rescue Express is capable of carrying 45 medium to large dogs, up to 75 cats, as well as rabbits, guinea pigs, hamsters and reptiles.

“Being centrally located in Ontario we are perfectly positioned to be able to transfer animals from some of our northern partners to areas throughout the province including North Bay, Timmins, Sudbury as well as east to Ottawa and south to Toronto as well,” stated Liam Cullin, Executive Director of the North Bay & District Humane Society.

The vehicle came into operation last fall but came into being thanks to a generous $100,000 donation from Pet Valu.

“I don’t think there is an operation like this anywhere, so you are running into a large amount of animals in a single shot and they have to be moved,” said Paul Turner, the franchisee of the North Bay Pet Valu.

“Southern Ontario is a good place to do that because the market is so much larger down there, so this thing is huge and we are thrilled. I know it is getting used weekly.”

To date, Cullin estimates the Animal Rescue Express has moved about 250 cats, 40 dogs and another 60 other small animals like rabbits and hamsters.

The Express will be on the move next week as its expected to take more than 40 homeless dogs and cats four hours south to national adoption events in Kitchener on Friday, April 26th.