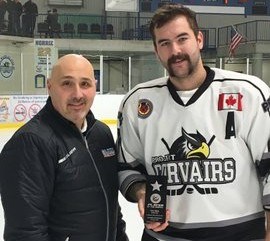 Just when Eric Allair moved away from home for his final season of junior hockey, his former team has become the class of its league and appears primed for a championship run.

But the 20-year-old defenceman, who played more than 150 games in a Powassan Voodoos uniform over four seasons, isn’t doing so bad himself in his new home, playing a big role on a club gearing up for a championship as the class of its league.

Allair, who also played 30 OHL games for his hometown North Bay Battalion, was lured south this season to join the Caledonia Corvairs of the 26-team junior ‘B’ Greater Ontario Junior Hockey League.

The six-foot-two, 220-pound blue-liner was honoured before a recent game as winner of the Golden Horseshoe Conference’s Defensive Player of the Month award for October.

“I’m loving it,” Allair said following a recent win. “It’s kind of a nice change. I had been living at home and playing hockey my whole life, so I just figured in my last year, I’d maybe change things up and try moving away from home and playing. You always hear guys in the room talking about living away from home, so I thought it would be a good chance to try it out.

“It’s a great organization here and we get treated well. It’s great so far.”

Making the transition to Caledonia, located 20 minutes outside of Hamilton, a little more comfortable is the fact Allair is sharing a billet with former Voodoos teammate Dylan D’Agostino, himself a former OHLer who spent last season with the Hamilton Bulldogs.

Allair has two goals and 11 points in 24 games for the Corvairs (23-2-1), a club that is back on ice this season after taking a one-year hiatus in 2018-19. The Corvairs have been perennial contenders for the junior ‘B’ Sutherland Cup, having won three straight titles from 2014-16. North Bay product Tait Seguin served as captain the last time the Corvairs won it all in 2016.

The Caledonia club has traditionally recruited top-end veterans with OHL experience and that is the case again this season, with the list of ex-OHLers including Tyler Burnie, Ryan Wells, Nick McHugh, Ryan Littlejohn, Eric Guest and goaltender Aidan Hughes, among others.

“Hockey-wise, it’s definitely a little different from where I came from in the NOJHL. It’s a little chippier because we have the facemasks on and everyone gains a bit of toughness with that. Games can be pretty chippy, I find, and people aren’t held accountable with the cages on.”

Allair is also busy with off-ice pursuits. The former St. Joseph-Scollard Hall and Chippewa Secondary School student is working to complete his electrical apprenticeship, which he first started working on during his time in North Bay. By day, he is working with an electrical contractor, before heading off for practices or evening games. Allair likely would not have ventured south had he not had an opportunity to continue his apprenticeship, a connection that was arranged with the help of the Corvairs front office, which includes former NHLer Mike Bullard as head coach and general manager.

“It all kind of fell into place with the apprenticeship,” Allair said. “It worked out perfect, so it’s kind of the best of both worlds.”

On the ice, Allair plays a lot of minutes among the team’s top four on the blueline, and he said his conditioning and puck skills have come along over the past few months. But he knows his strength is as a shut-down defenceman, and he will continue to be counted on, especially in the dying minutes of close games when the bench gets shortened.

With the junior hockey roster deadline still more than a month away, there may be more experience added to the Corvairs roster, but the goal will remain the same.

“Everybody here is pretty determined to make our way and win the Sutherland Cup,” Allair said. “Everybody’s in the gym, working hard and trying to get better every day.

“That would definitely be one great accomplishment for my last season in junior for sure.”

About the Author: Ken Pagan

Ken Pagan is a former sports editor, reporter and avid supporter of local sports who lived in North Bay from 2002 to 2012.
Read more