A day of awareness and mourning 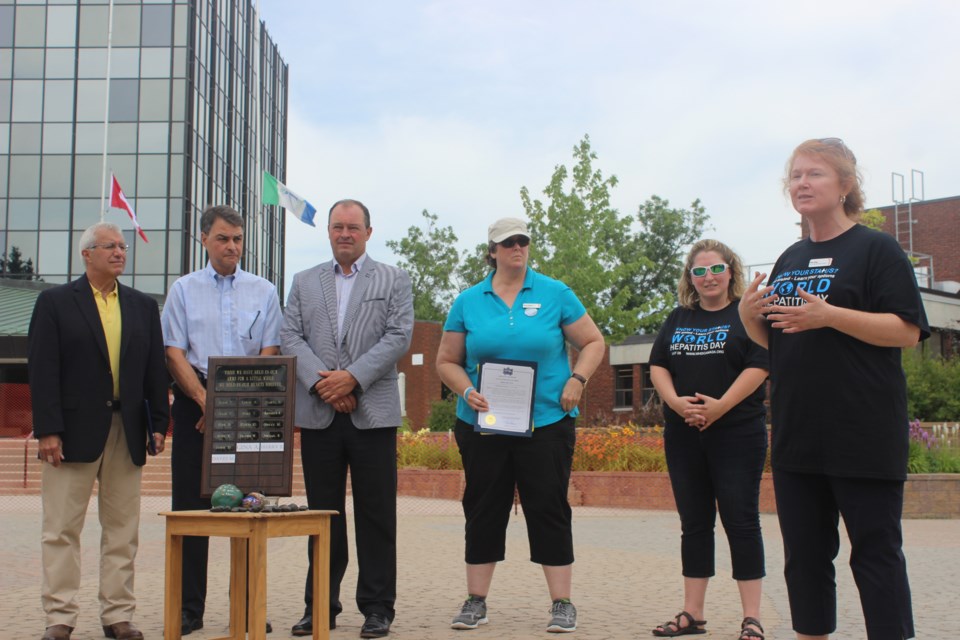 Wednesday marked World Hepatitis day in North Bay where dozens of members of the communities gathered in awareness and mourning. Photo by Ryen Veldhuis

“You never really know until it’s too late,” Dr. Stacey Mayhall, Executive Director of the AIDS Committee said. It was both a day of awareness and mourning at City Hall during the proclamation of World Hepatitis Day in North Bay.

Following the proclamation reading by Mayor Al McDonald, a candle vigil was lit in memory of those recently lost to the disease, their names written on a plaque. Gina A., Harry B., David M., the new additions read.

“We may lose as many as five people in a year due to Hepatitis C or through something else as a direct result,” Dr. Mayhall explained. “Roughly 1,800 people in the area are suffering for sure,” she said, noting that they can never really know the numbers until they test individuals who come through their doors.

One of them, James Bernard, said when he was diagnosed it changed his life, but through knowing, Bernard was able to seek out proper treatment since.

For him, having friends and family to get through the challenges made all the difference and he encouraged others to be proactive about their health.

“Know your status, get checked and find out your options as soon as you can,” Bernard said.

After the vigil, in an effort to raise awareness, they held free Hepatitis C testing for those who wanted to take the initiative and ensure their health and safety moving forward.

“I think getting tested is key,” Dr. Mayhall said. “You really have to commit to it, especially if you’re a person at risk.”

Hepatitis C is the liver disease caused by the blood-borne Hepatitis C virus (HCV). Hepatitis C causes inflammation of the liver which can eventually lead to cirrhosis—permanent and extensive scarring of the liver—preventing it from functioning normally. A small percentage of those with cirrhosis will develop liver cancer. The liver carries out many important and complex functions such as aiding in digestion, maintaining levels of cholesterol, storing vitamins, minerals, iron, sugar and filtering blood.

Dr. Mayhall said there are many people who’ve had it for years without knowing, so it was important to take the steps necessary for awareness and prevention.