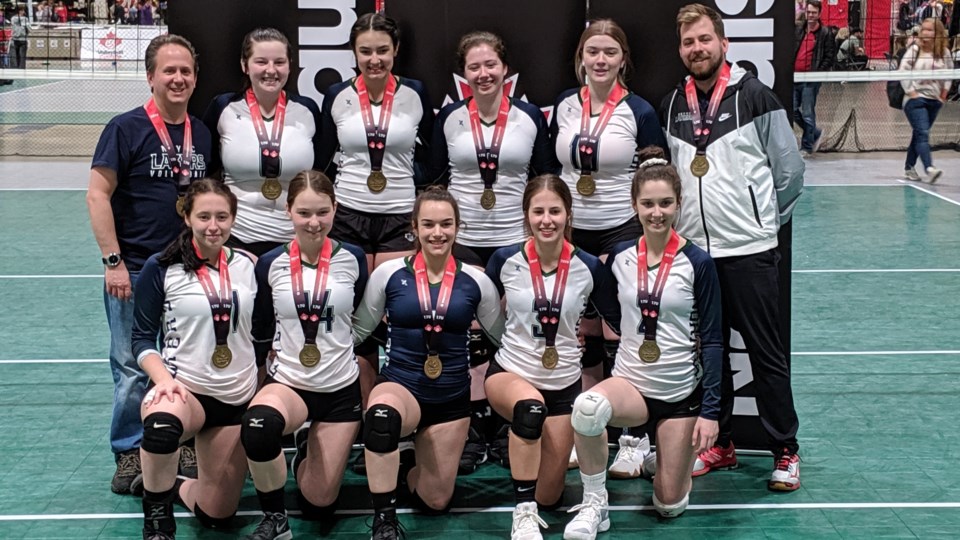 The North Bay Youth Volleyball Club - Lakers 17U girls team took Gold at the Volleyball Canada National Championships in Toronto over the weekend.

The team was coming off a successful season, but fell short of its goal of securing a medal at the Ontario Championships in early April.

The team set its sights on closing off the season on a positive note at Nationals.

Day 1 preliminaries proved to be a challenge for the team as they fell short in their opening three games losing to teams from Ontario and Quebec.

In power pools on day 2, the girls elevated their play and finished the day with a 2-1 record going up against teams from Ontario and Alberta.

The team saved their best play of the season for the playoff round on day 3.

Following a hard-fought win in game one, the girls faced SAS Blue from Alberta in the quarter finals, advancing to the semis in a two-set win.

In their semi-final matchup, they faced team Canuck from Alberta who they lost to on day 2. A strong team effort resulted in a two-set win for the Lakers (25-19, 25-22).

In the gold medal final, the Lakers faced the Voyageurs from Quebec. The two evenly matched teams battled hard with the Lakers taking the first set 25-23.

The Lakers got off to a slow start in the second set, falling behind early 12-6.

However, once again the team would not be denied. Strong serving and a relentless offensive attack by the Lakers saw them surge back and take the second set 25-19, securing the Gold medal in the Division 3, Tier 3 final.