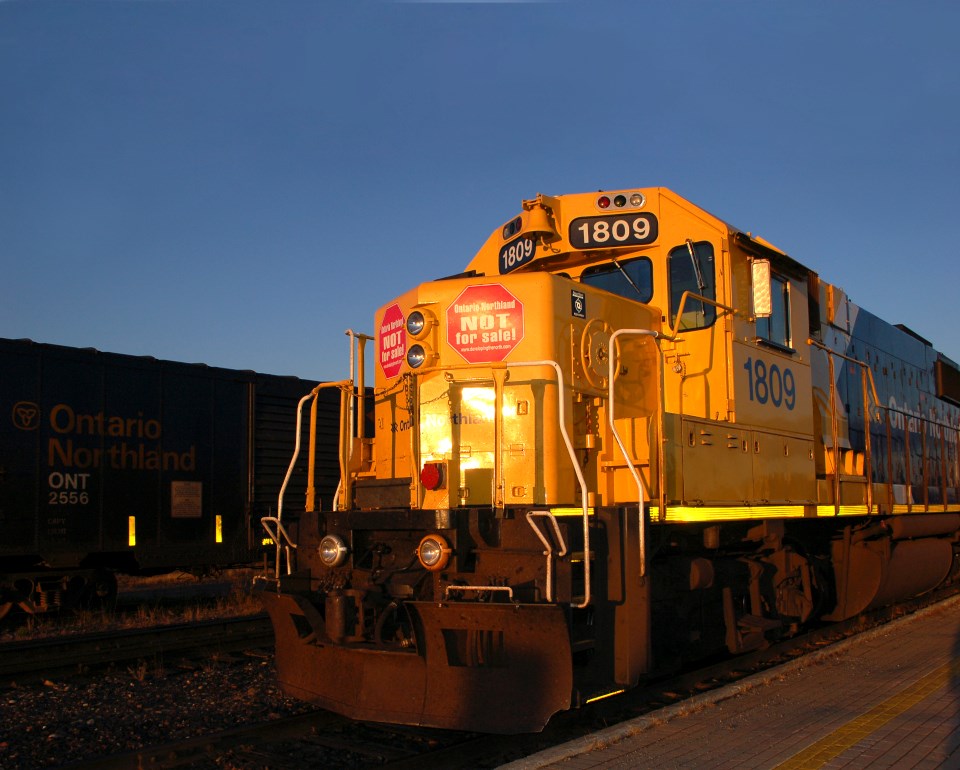 Trying to get access to the nitty gritty details behind Queen's Park's strategy to restore passenger rail service in northeastern Ontario has proved to be a frustrating exercise for Éric Boutilier.

The rail enthusiast, journalist and photographer from North Bay discovered this past spring that a rail revival draft plan submitted by the Ontario Northland Transportatin Commission (ONTC) to the Ministry of Transportation (MTO) for review is an extremely close-hold government document that's not for public consumption.

Boutilier was rebuffed in his attempt through a Freedom of Information (FOI) request to see the draft and he expresses doubts about whether the Ford government can deliver on a 2018 campaign promise to restore the Northlander, a Cochrane-North Bay-Toronto train service that was axed by a previous provincial government eight years ago.

"There are so many questions that I have," he said. "If the province is sincere in its commitment to bring this back within its first mandate, time's ticking away here."

Boutilier is determined to hold the Ford government accountable to ensure that the service is returned in full. When the Northlander was cancelled in 2012, the then-McGuinty government cited high operating costs and declining ridership.

It was part of that government's aborted attempt to sell off the historic North Bay-headquartered transportation provider, originally established at the turn of the last century to encourage settlement and spur economic growth in the region.

The Northlander service wasn't restored but the current Ford government had certainly had attentive ears while stumping in the region on the 2018 election trail and promised its return.

Through an earlier FOI request, Boutilier obtained a consultant's report indicating the Northlander's average annual ridership numbers during its last years of operation easily met the government's 35,000-a-year threshold for a market of its size.

Boutilier gets rankled when he thinks about mass transit in southern Ontario and the Ford government's decision to cut fares in half to $12 for the Union Station-to-Pearson Airport express train in order to reach its ridership goals.

"Are we not worthy here in Northern Ontario? We're asking for our fair share; we're not asking for more."

Rail advocacy has proved to be taxing work for Boutilier.

In fronting All Aboard Northern Ontario, he devoted five years and estimates he spent between $3,000 to $4,000 in out-of-pocket expenses purchasing web domains and setting up websites, arranging marketing material, and logging close to 5,000 kilometres on his odometer for community consultations, to meet with politicians, and to photographically document Ontario Northland's stations and rail infrastructure for a report that was being prepared.

"I've put my heart and soul into this."

Feeling that it was more of a Sisyphean effort in time and effort than he was prepared to invest, he dropped out of sight early last year to pursue career interests.

But after reading local media reports late last year, quoting Ontario Northland president-CEO Corina Moore saying that passenger rail plan was close to completion and ready to be filed with the MTO, Boutilier filed a Freedom of Information request last February to access the document.

Within a month, he was advised by letter and email that his request was being denied.

Carrie Girard, legal and executive assistant to Moore, indicated the draft plan is an eyes-only document for senior bureaucrats and ministers "for the purpose of evaluating options and feasibility of a passenger rail service. The business case is being used by the ministry and cabinet to inform decision-making."

If the plan were approved, Girard said, releasing the document for public consumption would jeopardize the tendering process to procure equipment.

Boutilier calls it an "outright attempt to block access to the plan."

If it deals with procurement, he argues, at least release a partial or redacted plan omitting the confidential parts. He is appealing the ruling to the Information and Privacy Commissioner's Office.

An MTO spokesperson confirmed the ministry has received the initial draft for northeast passenger rail and that the government "continues to review the results and analysis" of the case.

Last April, oversight of Ontario Northland was shifted from the Ministry of Energy, Northern Development and Mines to the MTO in order to centralize oversight of all agencies that deliver public transportation.

The spokesperson provided no timelines on when a final decision from the province is expected, the ministry's corporate messaging almost mirroring that of an earlier response from Ontario Northland.

"The Ontario government will continue to review initiatives to meet transportation needs in the North, including optimizing bus services and options for passenger rail service. This work is an important part of the government’s plan to promote economic development and keep people and goods moving in Northern Ontario."

Two years into the Ford government's mandate, without a rail revival plan on the board, it's caused rail supporters like Boutilier to question the province's commitment to the endeavour.

Last year it was revealed that a high-ranking rail official with Ontario Northland expressed his reservations about the restoration of passenger service and favoured an expanded bus service over the full restoration of the Northlander.

The agency publicly ignored the revelations and instead revealed it was working with Metrolinx – the ONTC's sister agency running transit in the Golden Horseshoe – to jointly work on a detailed business case on the return of rail service.

According to ONTC's timeline last year, the agencies were to present their case – detailing operational requirements, options for implementation and a “responsible level of funding” – to the government last fall.

But a recent policy paper on passenger rail released by a government-funded think-tank has Boutilier contesting that it smacks of insincerity and "double speak" by behind-the-scenes bureaucrats and politicians in foreshadowing a disappointing final decision.

"The Thin Case for Passenger Rail in Ontario's Northern Region" – posted by the Northern Policy Institute (NPI) and authored by Al Phillips, an associate with the University of Manitoba's Asper School of Business, examined the arguments in support of passenger rail.

While there is no "be-all and end-all definite answer," the paper said, economically, regularly scheduled service doesn't make sense. The expanding bus network and upgrades to the Ontario Northland fleet seem to address the needs of this region's aging population, and the level of per-passenger subsidy is lower than what would be required for passenger rail.

Boutilier labels the paper as "misleading" and calls it an attempt to undermine efforts in returning a "safe, reliable and affordable" mode of transportation that's wanted by Northerners.

With the business case draft under review at Queen's Park, Boutilier questions the report's timing, calling it "curious" and "suspicious," and is troubled that the NPI paper lists Moore, the ONTC president, as being on the institute's board of directors.

An ONTC spokeperson replied Moore is no longer on the NPI board, having completed her one-year term this month and that she had "no involvement in the development or review of NPI’s recent paper on passenger rail in Northern Ontario."

Northern Policy Institute president-CEO Charles Cirtwill responded that NPI directors perform a governance role only and play "no role in choosing, reviewing or monitoring the research of the institute."

He asserts that NPI is "not an agency of the government any more than Bombardier is," and receives public funding from federal, provincial, municipal and Indigenous partners.

As to the contents of the paper, Cirtwill said there are "uncontestable facts: rail costs more than road," has limited flexibility and within the context of a thin market presents limited environmental advantages.

"That does not mean we should not have rail," he said.

The author outlines specific instances where spending more per rail to subsidize rail is sensible: to connect remote First Nations, connect regions and for tourism.

"The Northlander fits all three in my view," said Cirtwill.

Cirtwill said he would be "shocked" if the province doesn't reinstate the Northlander.

"As someone who has been involved in politics and public policy debate for over 25 years, I would say that making an explicit election promise and then breaking it is a dangerous game for any political party to play."