Some services offered at local shops have been cancelled or altered due to the COVID-19 crisis
Apr 21, 2020 6:00 PM By: Mackenzie Casalino 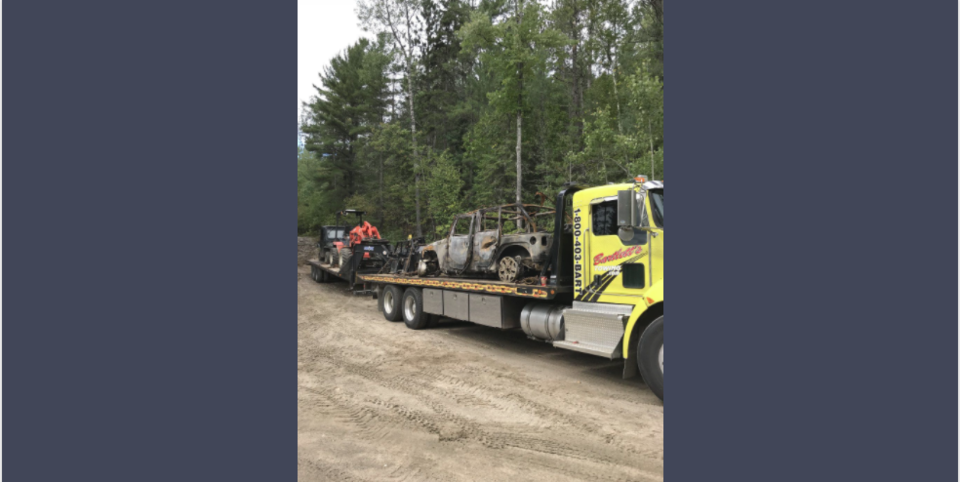 It's Madelaine David’s second week back on the job at Powassan Auto.

“I just wanted to take a step back and let everybody figure out how we're going to let this run,” says David, the service manager, who lives with her elderly parents.

She took time off at the beginning of the COVID-19 outbreak in mid-March to make sure proper measures were put in place by the province for the safety of her parents.

“I just wanted more information from the province, from public health officials, about what we should do and what sort of distancing. Then we came up with a plan and implemented it, and so now I'm back. I'm definitely more cautious about washing my hands.”

David figures she washes her hands 40 times a day, after interacting with the vehicles and customers at work.

Some services offered at the shop have been cancelled or altered because of the COVID-19 crisis. The shuttle service has been parked and the shop is asking customers to indicate in advance if they will be waiting for their vehicle while it’s being repaired.

Most of the chairs in the waiting room have been removed and the company has taken additional measures to ensure staff and customers are safe by adding plastic sheets and minimizing contact with the five to 10 clients they see daily.

David says staff are wiping down all parts of vehicles before and after repairs, including stick shifts, steering wheels and door handles.

Cody Gauthier, an electrician with Limitless Electrical Solutions in North Bay, hasn’t been very busy since social distancing rules were put in place.

Customers, he says, have called and said they want a fixture changed.

“That's not important. It's not worth it,” says Gauthier

He only will attend jobs that are considered emergencies, such as someone losing power to their home.
Gauthier is more concerned for the safety of others.

“I'm not too concerned about myself; I'm in really good health. It's more just spreading it. So I'm more concerned about that because you don't know who you're going to give it to.”

Kathy Prudeau is always worried about her husband’s safety when he goes out on jobs. He is an electrician and owner of Paul Prudeau’s Electrical & Maintenance.

He is no longer doing jobs at residential homes, she says, only industrial and commercial services the company has contracts with.

“We have people calling us who want us to go into their home, but for the safety of us and them . . . no. So no, we're not, we don't know where they are or where they've been. So we don't know how clean their houses are, and how they're disinfecting,” says Prudeau.

She says they try to limit the number of repair jobs.

“Because of our contracts, we have to go; we have to do the industrial and the commercial. But residential, we are absolutely not going in unless it's an outside plug or it's an emergency.”

She says her husband wears personal protective equipment (PPE) and takes precautions whenever he is on site.

“We're very careful. Whenever my husband goes into industrial areas (it’s) mask, gloves and goggles, and we're always six to eight feet from who’s ever in that area.”

They’re even cautious when leaving the house for essentials such as groceries.

“There aren’t many cases in North Bay, but we (take safety measures just in case). We went to Costco a couple of weeks ago and we were the only two in the whole store wearing gloves, goggles and a mask,” says Prudeau. “People were laughing at us, but we didn't care.”

Larry Bartlett says his staff has been pre-screening customers over the phone before they send a tow truck.

“In most cases, we try to make arrangements to not deal with the customer at all, if that’s possible, just like everybody else,” says Bartlett, who owns Bartlett’s Towing.

“They can pay over the phone in advance and leave the keys in the vehicle or mailbox, that kind of stuff. Or leave it there you know, the gas bar attendant, whatever the case may be.”

Bartlett says he’s told drivers not to come into the shop and he’s doing his best to keep other staff separated by having one mechanic at each location.

“Every driver has his own truck, they don't switch trucks. Before we got a lot of different styles of trucks; we have flatbeds, and little tow trucks and big tow trucks and trailers. In the morning when the guys would come in, we jump in (the truck needed). Now there's no more of that. If you get one truck, that's all you get. You get a call on that truck or you don't.”

Bartlett says he hopes to implement discounts for frontline workers and for the public during social isolation.

“We're trying to find ways to help the community get together and, you know, be positive about all this stuff at the same time…. People aren't out a whole lot, but people still need to move around, maybe to get out and do groceries. So, we want to be able to help those people who need help during these times.”

Local health unit declares outbreak in district long-term care home
Jul 3, 2020 12:35 PM
Comments
We welcome your feedback and encourage you to share your thoughts. We ask that you be respectful of others and their points of view, refrain from personal attacks and stay on topic. To learn about our commenting policies and how we moderate, please read our Community Guidelines.