Three local teams in the Quarantine Cup; who would you choose? The Centennials, Blackhawks or Skyhawks?
May 7, 2020 10:30 AM By: Chris Dawson 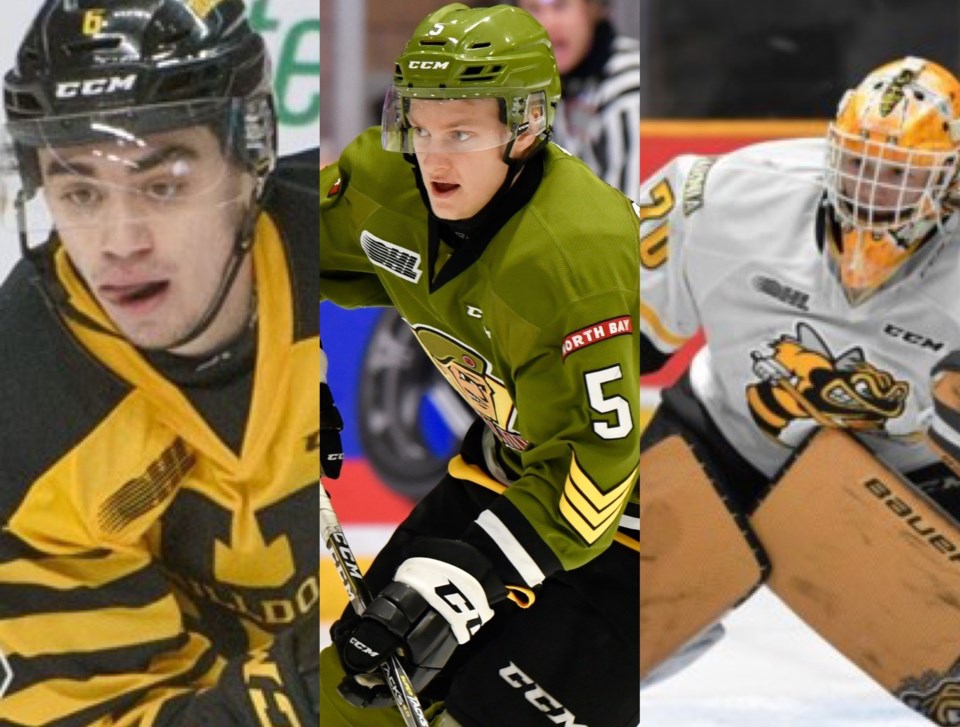 Okay, every sports fan is looking for ways to get through this pandemic.

So, with some help from some local hockey guru's we have come up with the North Bay Quarantine Cup.  Here's the scoop. The Quarantine Cup is made up of three local junior hockey rosters made up completely with local talent, and there's a lot of talent from major junior to high school.

So, if Memorial Gardens was available, these players could prepare for the hopeful full return of hockey by taking part in this unique three-team local tournament.

Remember, this is for fun and these are just hypothetical rosters. But you will get a chance to vote on who you think would win at the bottom of the page!

Let's start off with the North Bay Skyhawks. the team is led by Battalion defenceman Pacey Schlueting on the blueline. The blueline also includes a pair of star defenders from the Powassan Voodoos in the form of Battalion U18 draft pick Jacob Peterson-Galema and Eric Mondoux.  Up front, the Skyhawks are led by Lucas Edmonds, whose father Randy coached the real Skyhawks. The dual citizen played junior and some pro games in Sweden last year.  The roster also features former Trappers sniper Nick Davis and a pair of Battalion prospects playing in Pembroke in the form of Jesse Kirkby and Jack Stockfish.  Between the pipes, the squad is led by another former AAA Trappers star and Battalion prospect Reece Proulx.

Up next, is the North Bay Centennials. This roster has a connection to past with Payton Vescio and Tomas Yachmenev leading the way. Their father's, Kevin and Vitali, both starred for the Cents back in the 1990s. Vescio is joined on the Cents blueline by Carleton Place Canadians NCAA Division I commit Ben Brunette and former Sault Ste. Marie Greyhounds prospect Kobe Seguin. Up front, the Cents are led by Yachmenev and Voodoos teammates Ryan Mills and Brett Shawana.  Zach Lefebvre, who plays for the CCHL's Hawkesbury Hawks re-unites with his formerTrappers teammate Nathaniel Lalonde on the Cents. Between the pipes, the Cents are led by Hamilton Bulldogs puck stopper Zach Roy.

Last but not least is the North Bay Blackhawks. This team is led in goal by Sarnia Sting rising star Ben Gaudreau and some size and physicality that would be the envy of the St. Louis Blues and Boston Bruins. Protecting his blueline is 20-year-old Hamilton Bulldogs blueliner Jake Gravelle and the OJHL's Brampton Admirals brother duo of Ethan and Clarke Allair. On offence, the Blackhawks will be led by Team Canada East and Lake Superior State NCAA Division I commit Cole Craft. Craft is by his Rockland Nationals teammate Joe Jordan veteran 20-year-old junior B stars Dylan D'Agostino (Caledonia Corvais GOJHL) and Mason McMahon (Elmira Sugar Kings  GOJHL). Oh yes, Cole's brother Callum, who is the only 04 on the Blackhawks, joins his brother on the team.

Even though this is a hypothetical or virtual tournament, it is pretty obvious there's a lot of local hockey talent at all different levels in the North Bay area.

You can vote for your winner at the bottom of the story!

Two more COVID-19 cases in the district
Jul 6, 2020 6:33 PM
Comments
We welcome your feedback and encourage you to share your thoughts. We ask that you be respectful of others and their points of view, refrain from personal attacks and stay on topic. To learn about our commenting policies and how we moderate, please read our Community Guidelines.