Water Walker issues challenge: What are YOU going to do about it?

Elder walks around all Great Lakes to raise awareness about caring for water -- the source of all life.
Aug 29, 2017 4:07 PM By: Maurice Switzer 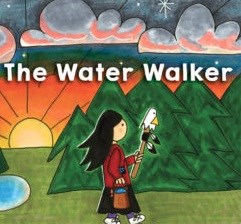 A writer presents a book publisher with a story pitch.

“It's about this woman who -- when she's 61 years old -- decides she's going to walk around all the Great Lakes to show how concerned she is about water pollution.”

That sound you hear is the publisher's door slamming, or maybe their telephone hanging up.

Fortunately for the folks at Second Story Press, this was not how they greeted Joanne Robertson when she approached them with her idea for “The Water Walker”. Perhaps what clinched the deal for the Atikameksheng First Nation fine arts graduate was when she told the Toronto publishing house that specializes in books about “strong women” that the tale she wanted to tell was not fictional.

Elder Josephine Mandamin did indeed decide in 2003 that she was going to walk around all five Great Lakes to call attention to the deterioration of water, the source of life for every living thing on the planet. Now, 14 years later, and coincident with the release of Robertson's delightful 36-page tribute to her, the Anishinaabe great-grandmother is retiring the last of 11 pairs of sneakers that have travelled some 14,000 miles, half the Earth's circumference.

“As women, we are carriers of the water. We carry life for the people,” says Josephine, who during her journey has won acclaim as an environmentalist, a feminist, and an important Indigenous voice. “So when we carry that water, we are telling people that we will go any lengths for the water. We’ll probably even give our lives for the water if we have to. We may at some point have to die for the water, and we don’t want that.”

She recalls being able to drink water right from Georgian Bay when she was growing up in Wikwemikong. Her epiphany came – as it does in “The Water Walker” – when “a wise ogimaa” (Midewiwin Three Fires Lodge Grand Chief Eddie Benton Banai) told her: “The day will come when an ounce of water costs more than an ounce of gold” and asked “What are you going to do about it?”

Robertson's plain-language text, sprinkled with Ojibwe words defined in a handy end-paper glossary, tells exactly what Nokomis Josephine decided to do about it – embark on a series of mega-marathons around and beside Turtle Island's major lakes and rivers, carrying a ceremonial copper pail of Nibi in one hand, and a feathered Migizi Staff in the other.

The book's author is also its illustrator, using child-friendly drawings to walk her readers through her story as briskly as Josephine Mandamin trudged along the shorelines with her copper pail.

But, like so many titles about Indigenous topics finally earning shelf space in Canadian libraries and bookshops, “The Water Walker” has just as much to teach parents as the children for whom they may be making the $16.95 purchase. University professors and high school principals often don't know any more or less than their kids about treaties, or land claims -- or national treasures like Josephine Mandamin.

Joanne Robertson succeeds in answering with her words and her art the same question that Nokomis Josephine answered with her footsteps: “What are you going to do about it?”

And, at a time when water is being sold for as much as gasoline, if not yet gold, readers of this deceptively charming little book are going to find themselves confronted with the same story-ending challenge: “What are you going to do about it?”

Opinion: Maurice Switzer, Can Leafs win Cup without a Chief?
Jan 11, 2018 9:43 AM
Comments
We welcome your feedback and encourage you to share your thoughts. We ask that you be respectful of others and their points of view, refrain from personal attacks and stay on topic. To learn about our commenting policies and how we moderate, please read our Community Guidelines.