It doesn't have to be taken to extremes, like dropping students off by helicopter in wilderness backcountry where they have to eat earwigs and squirrels to survive.
0
Sep 28, 2016 11:55 AM By: Maurice Switzer 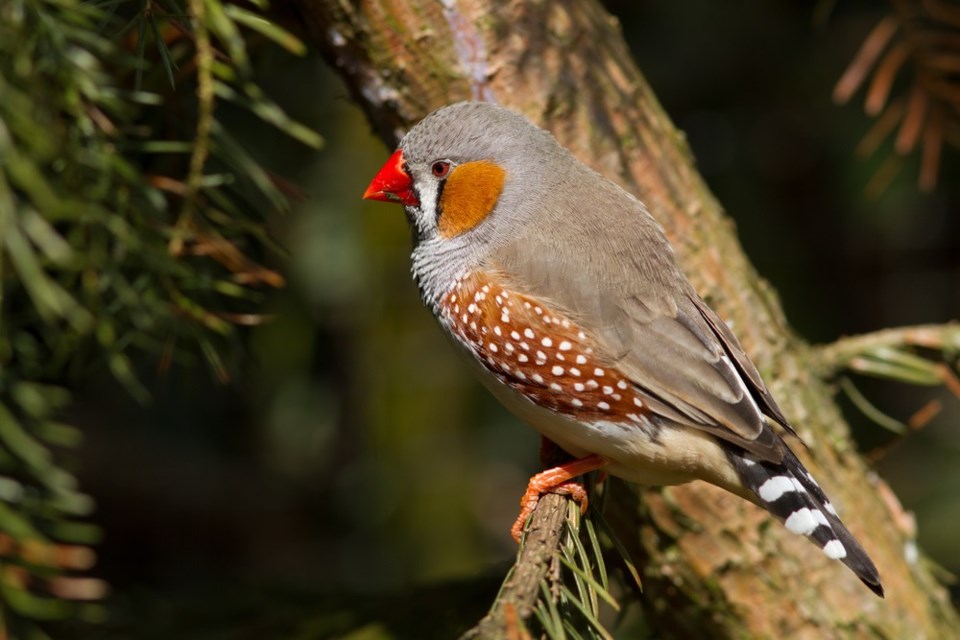 There are some fascinating learning opportunities available for anyone who has occasion to be awake at three o'clock in the morning.

That's when non-commercial radio broadcasters – like CBC – air programming not designed to cater to specific audiences identified by ratings surveys. In other words, that's when they fill air time with programs they don't care that anyone listens to.

So I have a bout of indigestion to thank for hearing about the amazing life of the Australian Zebra Finch.

It seems that scientists have discovered that, if Mrs. AZF sings to her eggs in the days before they hatch, her chicks will better adapt to higher temperatures. The scholars think this might be preparing them for the effects of global warming.

Meanwhile, marine biologists have learned that mother dolphins similarly engage in whistling to their unborn calves as part of the imprinting process that bonds their parental relationship.

Scientists haven't yet got around to studying the other estimated 1,203,373 species of mammals, fish, and birds that share our planet, but it's a safe bet that many of their mommies have been using similar practices since long before we two-leggeds arrived on the scene.

It's only been accepted wisdom for the past century or so that there might be merit in some form of human prenatal communication, such as playing Mozart or reading poems by Tennyson to babies-in-waiting.

All this continues to remind me of the teachings of the late Anishinaabe scholar Basil Johnston, who I once heard say, “If all the libraries in the world disappeared tomorrow, people could learn everything they needed to know by just observing Nature.”

It's not just WHAT we can learn from our natural surroundings, it's WHERE the lessons are best taught. That means not confining students to classrooms, which are far too often windowless boxes that no enlightened prison warden would consider appropriate for even their most incorrigible inmates.

Now that weekday quiet has returned to our downtown streets and mall corridors and food courts – schools are back in session -- it’s to be hoped that more teachers look for outdoor learning opportunities whenever possible.

It doesn't have to be taken to extremes, like dropping students off by helicopter in wilderness backcountry where they have to eat earwigs and squirrels to survive. It can be a class outing to a maple sugarbush operation or a day trip to a fish hatchery.

Over a decade ago, a British study indicated that outdoor learning can “confer a multitude of benefits on young people’s physical development, emotional and mental health and well-being and societal development.” (Well, I said it was a British study!)

Kids can learn that milk originates in cows, not supermarkets; that one reason rabbits can hop so fast is that they do not smoke cigarettes; that the Northern Lights are not a laser show created by Pink Floyd; and that our environment is something we all need to protect.

To put it in terms that education directors can easily understand, Ontario has spent $14 billion in the past 13 years to build 700 new schools, and the estimates of repairing and replacing the other 4,000 in the province are beyond staggering.

Think of how much our tax bills might shrink if we were more creative about providing effective teaching spaces, instead of relying on bricks-and-mortar structures that sit empty 60 percent Monday through Friday, and 100% of each weekend and for two months each summer! Bankers are getting wise to the value of changing that paradigm.

The best learning doesn't have to be “outside the box” -- it can simply be outside.

Who knows? Students might even get to hear a mother finch singing to her eggs.

Maurice Switzer is a citizen of the Mississaugas of Alderville First Nation. He lives in North Bay and operates Nimkii Communications, a public education practice that focuses on the Treaty Relationship.

Opinion: Maurice Switzer, Can Leafs win Cup without a Chief?
Jan 11, 2018 9:43 AM
Comments
We welcome your feedback and encourage you to share your thoughts on this story. We ask that you be respectful of others and their points of view, refrain from personal attacks and stay on topic. To learn about our commenting policies and how we moderate, please read our Community Guidelines.