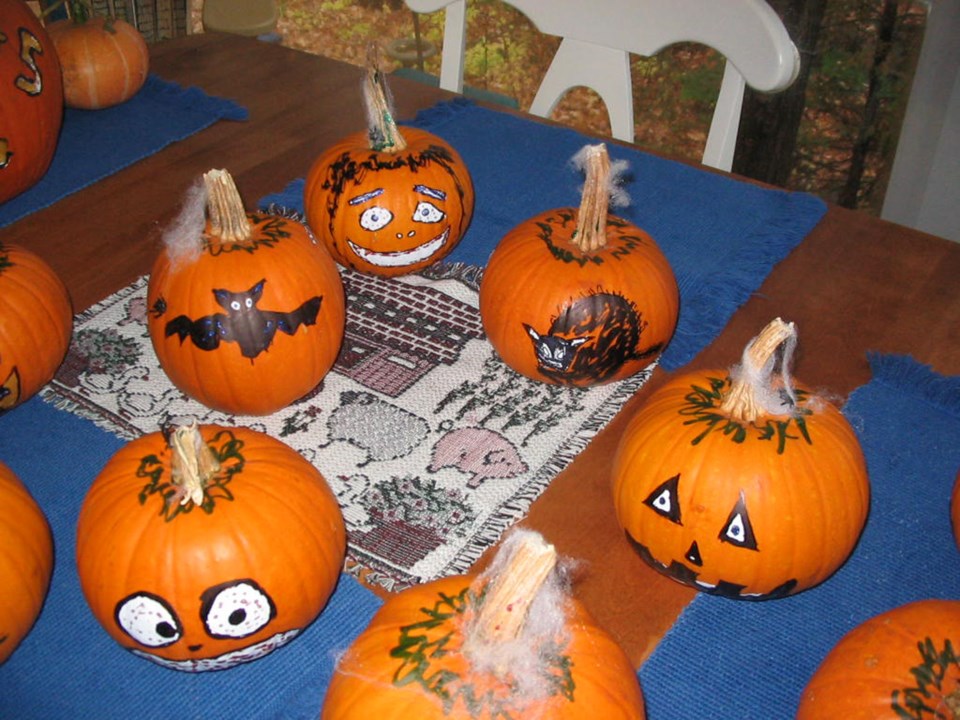 If we can defer the Stanley Cup, the Kentucky Derby and the Masters, why not defer Hallowe’en until next May?

It was a silly idea but I had to run it by Herself. No, she said, enough of this deferring things. It was bad enough messing up Thanksgiving – Hallowe’en must proceed in some manner. Besides, she said, there are no pumpkins in May.

On that note, Martha said we ought to buy a pumpkin and make a jack-o-lantern for the children this Hallowe’en – to cheer them in this time of the pandemic. They probably should not be trick-or-treating this year at the door but we do not want them to forget the tradition of dressing in costume and begging the neighbours for unhealthy treats. Okay, I added that last phrase.

I wrote pumpkin on the grocery list – get a nice one, she said.

Now, the grocery stores do have cardboard bins full of various sizes of pumpkins, some that would make excellent jack-o-lanterns. A pumpkin must be of a certain size to facilitate easy carving. It must be large enough to show the candle-lit design all the way to the street so passers-by can appreciate your handiwork. However, it must be small enough to carry from the car to the operating table and thence to the front door. Pumpkins seem to be getting heavier as the years roll by. Something to with the environment, I suppose.

However, I had noticed on one of my motorcycle trips along the back roads south of Verner that several farms had pumpkins growing just far enough away from the house to suggest they might be part of a pick-your-own pumpkin enterprise. Farmers had planted many pumpkin seeds in the spring, unaware that the pandemic would last so long and curtail the Hallowe’en market. The farmers were more victims of Covid. Surely they would not mind a fellow picking up one of those spare orange squashes . . .

I procured a pumpkin.

The first step in carving a scary pumpkin is to remove the innards. You must cut a hole around the stem that is large enough for your hand, or if you are quite dexterous, to use a spoon to clean the interior. This roundish piece will serve as the lid, keeping the rain off the candle on Hallowe’en.

Save the seeds for the squirrels and blue jays although there is likely a city bylaw prohibiting feeding wild animals. Ignore it. Country chickens, if you are fortunate enough to have them, will peck and eat the pumpkin but it may produce a more yellow yolk.

If you are artistic you can do the next step freehand, but it is likely better if you draw your design on the outside of the pumpkin with a Sharpie. Last year I thought to frighten the children with the face of Justin Trudeau but since he has grown a beard that becomes a challenge. The new shadow Prime Minister, Jagmeet, presents a similar problem.

The traditional triangular eyes and nose are the result of using a sharp and dangerous knife to cut into the tough pumpkin hide. Three neat slices will make a triangle whereas trying to carve round eyes is very awkward. The mouth is easier because if you make a small mistake it will only look like a crooked grin. But not this year.

Santa brought me a Dremel tool last year and this is the perfect surgical instrument, okay, tool, for carving jack-o-lanterns. With the Dremel you can make incisions only to the subcutaneous layer so the candlelight (I was thinking of using a 25-watt bulb, but Martha thought I might shock someone other than myself) will show faintly through as wrinkles or worry lines.

Martha drew the design, and it was quite good – scary but not too scary for the wee children. I went to work with the Dremel. After I wiped the kitchen counter and washed the kitchen floor, I threw my broken jack-o-lantern in the compost bin. Who knew that the Dremel bit would become clogged and run amok when I was doing the left ear?

I had a second backup pumpkin in the car, however Martha said she was going to make a pie with it. I am not sharing my pumpkin pie with any trick or treaters, so Al, forget the Pirate costume – it won’t work this year – you’ll have to get your treats the usual way - with my monthly payments.

Cry Havoc
Nov 11, 2020 10:59 AM
Comments
We welcome your feedback and encourage you to share your thoughts. We ask that you be respectful of others and their points of view, refrain from personal attacks and stay on topic. To learn about our commenting policies and how we moderate, please read our Community Guidelines.