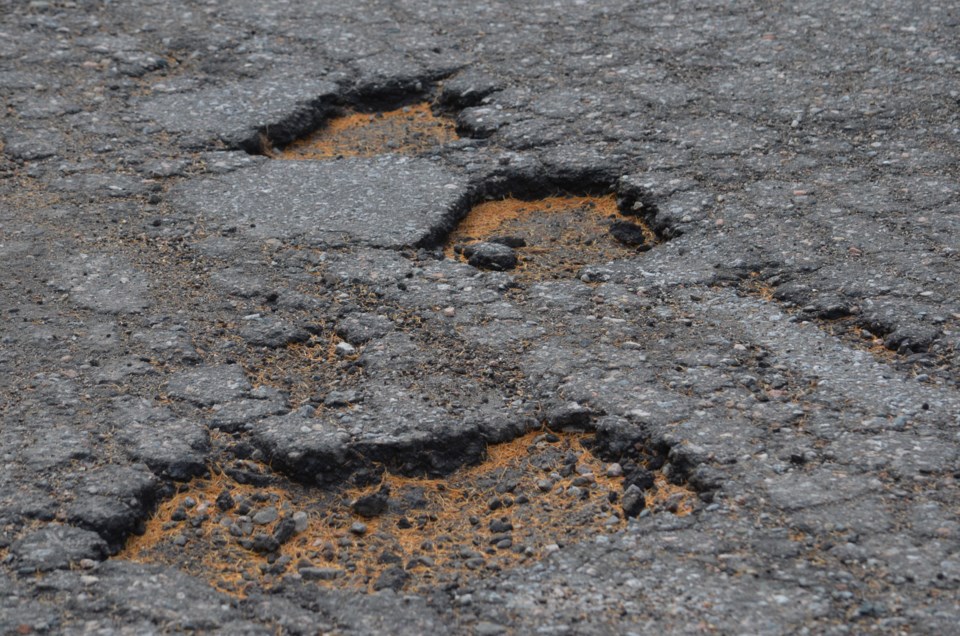 The Fall Pothole Filling Project is or should be well underway in the City before the snows of November begin. Filling potholes now will stop further degeneration of the road surface due to ice expansion/contraction in said holes and provide a less dangerous drive for people trying to avoid damage to suspension, tires, and wheels as they skid, swerve, slip, and slide their way through winter.

No doubt there is a masterplan for when to fill potholes on all the streets and roads within the City boundaries. Some consultants must have drawn coloured lines on a City map outlining the order in which and how often the roads must be maintained - pothole-wise - spring, summer, and fall.

In olden days, one could stand before council and present a complaint about the condition of a particular road but in today’s world, one can only communicate with an employee at Public Works and plea for a few shovelfuls of asphalt mix. It seems excessive to prepare a documented presentation of 10 minutes duration to seek redress for holes in the pavement. (Although the condition of the pavers on Main Street approaches that requirement). Even with photographs to aid in the understanding of the need, a fixing potholes presentation would take less than five minutes.

Perhaps the new, better way of communicating a need to City Hall (other than a face-to-face, which is always available if you have the time to make an appointment or travel to City Hall, find a parking space, and paste a smile on your face for the selfie) is to use social media.  There are likely templates available on the internet for causes in the public interest much as there are for résumés.

The beauty of doing a social media presentation instead of a council chambers stand-up routine is that the people who need to see your ideas or complaints could be the ones actually doing the work – not the councillors who may or may not be paying attention after the first minute of your ten-minute spiel.

However here is possible communique formatted to City Hall needs:

Dear Sirs and Madams:  with regards to the FPFP, could you please add Chadbourn Drive to Widdifield Station Road and the paved portion of Widdifield Station Road to the list of urgent pothole filling work scheduled before freeze-up. Attached is a photo of a typical pothole on Chadbourn, which is similar to the many hundreds along this route. We realize that we are outside the Urban Service Area (sometimes referred to as the Un-Serviced Area) and do not pay the high taxes that the people inside the City complain about, however, we deserve some attention to our roads which we use daily for work, shopping, and school transportation. These roads are also used occasionally by a fire truck, police car, or ambulance – the same as the folk downtown in the urban core. Although not as often.

If you feel that your social media request will strain the budget at City Hall, you can suggest a Go Fund Me campaign to pay for the 2 tonnes of asphalt and road crew wages needed to fix the roads before winter. You may, of course, substitute the names of the roads needing the attention of the FPFP to your area. (Full disclosure – I do not live on the above roadways and my street is in good shape – pothole-wise.)

One may easily substitute other problems into the template such as noise complaints, barking dogs, snow removal, sidewalk plowing/sanding, or used jeans recycling. There is little to be gained by presenting on taxes and water rates, even though a social media effort, as it might be a good idea to stoke the fires of contention once in a while until the next election.

It is always good form to open your request for services (complaint) with a pleasant salutation, like “G’day” or even a short joke or limerick. This softens your audience. And be sure to close with a ‘thank you’ even though your presentation falls on deaf ears or is beyond the attention span of your targeted audience. Do not use offensive language like ‘fix the da** potholes’ as cussing never gets you anywhere even though it might feel good at the time.

Have a good day. Drive safely. Avoid the potholes.