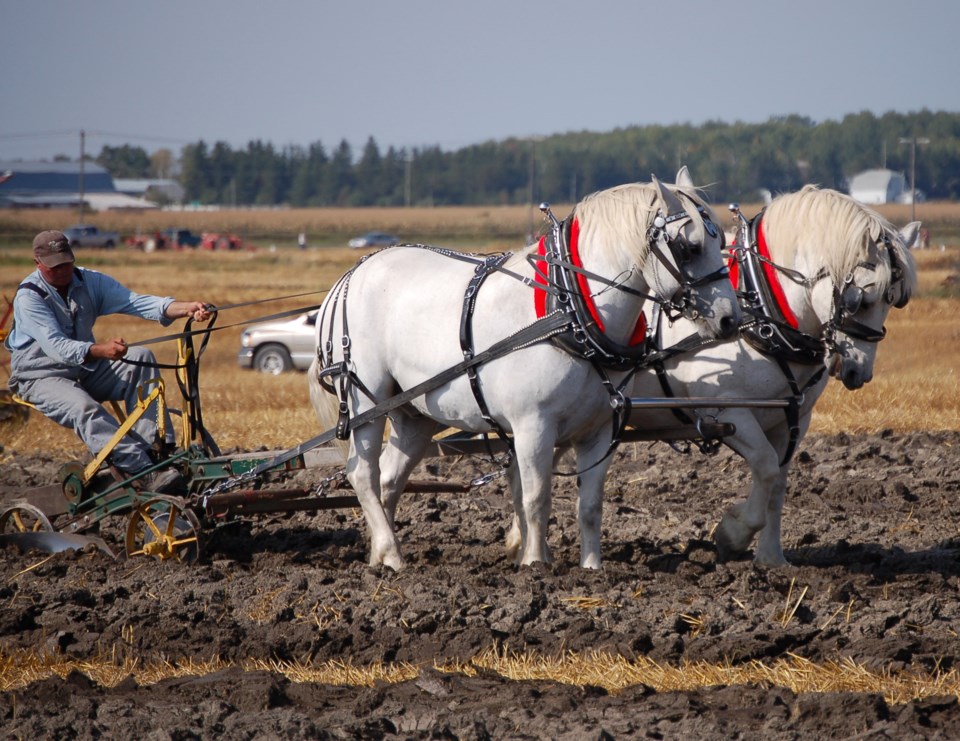 As excited as I was last year to hear the announcement that the International Plowing Match was coming to Verner, the ice cream and corn syrup topping on the pumpkin pie was to learn that there would be a catapult contest.

The last time the IPM came north it was to New Liskeard and the plowers with their horses, and tractors put on a great show.  With friends from Toronto, we took the train from North Bay to New Liskeard – a treat in itself. I don’t suppose they could find an engine and a few passenger cars to make the slow run from North Bay to Verner next fall but that might be an attraction in itself. No, I suppose not. Besides, if it did work, people from the south might think we had daily rail service here in the north.

As tricky and challenging as it is to drive a tractor in a straight line with the plow cutting to an exact depth, the real demonstration of plowing is with the horse-drawn plows. Just as the horses that do the heavy pulls at fall fairs know what to do, the plow horses know exactly what they are to do: pull together in a straight line, despite stones, roots and other tugs on the plow blade with a constant power so the person walking behind can keep the plow level, turning the soil in a neat furrow. There are extra oats and maybe a ribbon at the end of the day – just what a large horse wants after a good rubbing and brushing.

I have been trying to make the connection between catapults and plowing but not being an innovative science teacher I can only assume the idea was borne from seeing all the leftover pumpkins at Halloween. Or perhaps the science teacher and the Roman history teacher had a few glasses of bubblies after work. In any event, my dreams of seeing a huge Roman catapult of the trebuchet variety firing a 100 kg pumpkin some 300 meters were dashed when I read the rules as composed by one of our local engineering firms. The pumpkin missiles will have to weigh about 5 pounds and be fired by a device of limited size. Sort of like an RPG in modern warfare.

Nonetheless, it will be a great experiment in engineering and research. For surely the students will want to read more about Roman warfare and how the Romans used the various catapults to thin the ranks of advancing foes or breach the walls of a city under siege. In ancient warfare, the combatants fired mostly boulders at the enemy but also fired volleys of arrows and spears from their machines. They even used flaming missiles to set fire to walled towns. I wonder what a candle-lit jack-o-lantern would look like flying through the night sky? Pretty scary.

Back to more practical matters, the rules for the pumpkin catapult or hurtling contest has all the safety rules to ensure safe participation by the teams of six students. The environment will be cleared after the contest and pieces of pumpkin recycled or fed to cattle on nearby farms.

This was an important feature to me as this is food that the contestants will be flinging through the air at Verner. I was a little relieved when I read the 5-pound size limit but then I remembered that these nice little pie pumpkins were about that size. What if the students used up all the pie pumpkins in their rehearsal and test firings of their catapults? Not to worry my sister-in-law said as she slipped a pumpkin and nut loaf into my carry bag at dinner the other night – you can make pumpkin filling from those big pumpkins too. What a relief.

So mark your calendar now for the IPM  and Flying Pumpkins at Verner this September. There are many things to see and enjoy, not just beautiful big horses pulling plows. Why, last time, in New Liskeard, we even got on the stage and demonstrated some Tai Chi. You never know – they might even have pumpkin pies for sale.