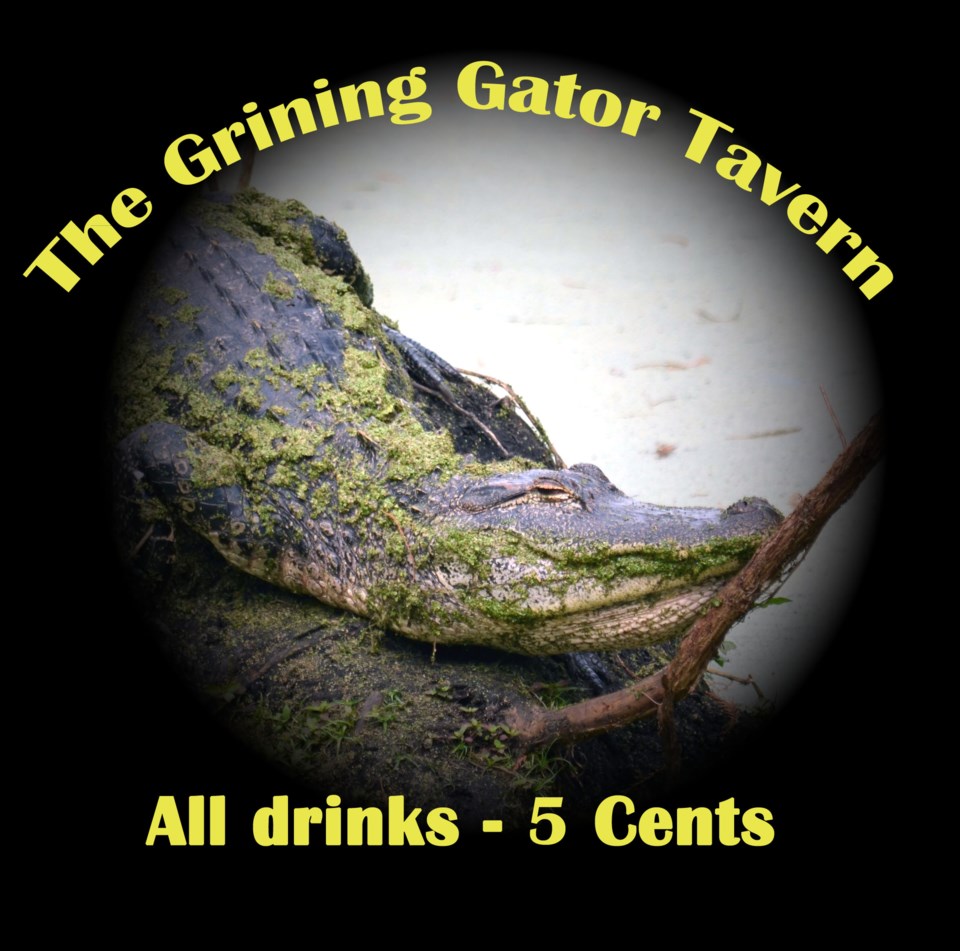 This is not an ‘Opinion’ piece,  only a recounting of a story I recently heard. It concerns an older man named Charlie whose life-long dream was to own a bar or tavern where he could serve drinks, enjoy conversations, spread cheer, and bartender wisdom to his customers.

A lesser dreamer might have been happy to marry a woman who owned a bar, but Charlie had a chance to realize his dreams when he won several millions of dollars in the Lottery. His idea was to sell drinks for 5 cents until he ran out of his first million dollars. If this sounds improbable to you, it also did to the people who manufacture red tape in the City.

Charlie’s first hurdle was to get a business licence. Drinking establishments were banned from the downtown by the Zoning bylaw. This was okay because Charlie had his eye on an old roadhouse on the outskirts of town. (Imagine something like the old Sweetwater Inn without  the rooms.) Charlie’s first mistake was telling the City Clerk that he planned to sell drinks for 5 cents. The Clerk  thought he must be planning to sell drugs to Bikers or have semi-naked dancers (the clerk did not specify to his honour whether they were women dancers since she had taken the Sensitivity training course.) No, it was just the idea of 5-cent drinks - a maximum of 2 per customer - that seemed so out of the ordinary.

Assured that is was okay to lose money by the City Solicitor, Charlie hired a contractor to refurbish the old inn. The Building Inspector checked the construction and was happy to get a voucher for two complimentary drinks. The Health department tried to get him to install more washroom units but Charlie said he was following the Tim’s washroom plan and the official went away. The Liquor Inspector insisted that Charlie must have food available in the old belief that eating negated the happy effects of alcohol. Charlie called the Hostess people and bought a supply of chips and peanuts in the shell. Having peanuts shells on the floor was part of his dream.

The liquor salespeople were skeptical about the 5 cents deal. Charlie would be undercutting all the other drinking establishments and a price war might ensue. Charlie assured the agents that he would only be in business until he lost a million dollars. The liquor salesperson did some quick New Math and decided Charlie would not be in business very long. He was happy to stock the bar with all the exotic drinks Charlie had on his list. Cash On Delivery was okay with Charlie.

The Mayor dropped by to see what was happening as there were rumours of a business competitive to one of his own interests coming to the City. The Mayor insisted that Parking Enforcement would have to verify that Charlie had adequate space for staff and customers. Charlie would have only one employee: his brother would be the floor sweeper, janitor, and bouncer. Charlie and his brother Tom had already taken the Alcohol Serving course at the College. Charlie gave the Mayor a complimentary drink voucher and the Mayor left after taking a selfie of himself in front of the bar mirror.

The Police and Fire officials soon heard about the free vouchers and showed up offering timely community services if Charlie should ever call. The Sales Tax officer investigated but because the drinks sold for only 5 cents, there was no tax. Since the chips and peanuts were complimentary they attracted no tax. The government official went away promising to return if there was some Value Added Tax loophole in the government’s favour for which they could get some more of Charlie’s millions.

The Mayor returned with the Economic Development officer who was worried that the Bar might give the city a bad name as a Drinker’s Paradise.  Bar Hopping was not officially on the Sports Tourism list. Charlie offered to join the Chamber of Commerce and the Rotary Club. He was already a Lion and a member of a downtown church. His application to the Better Business Bureau was turned down because they claimed his business was clearly a non-profit. The Mayor and his friend left after getting two more complimentary drink chits.

Charlie wanted to have a grand opening but the newspaper thought this was some kind of a scam  - selling drinks for 5 cents - and would not print his invitational ad. Charlie bought one of those ubiquitous yellow signs with the do-it-yourself letters and placed it near to the road. And then he moved it back four inches when the Public Works foremen came by for his complimentary drink voucher.

A week after the opening your faithful writer stopped at Charlie’s Tavern to see how Charlie and Tom were doing. It was mid-afternoon and there were a few cars in the parking lot but no one was sitting at the bar. I ordered a 24-year-old single malt and paid my 5 cents. Charlie stamped my hand with his ultraviolet drink counter- a maple leaf. The television was playing the CBC News and the shuffleboard table was unattended. About a dozen people were sitting at tables at the far end of the room.

“Who are all those people sitting at the tables down there with no drinks,” I asked Charlie. “Oh, they are Senior Citizens from the Home. They come in most Fridays. “ “Why are they not drinking,” I asked. “Are they teetotalers?”  “Oh no, they are just waiting for Happy Hour,” Charlie said and shook his head.

There is no moral to the story just the observation that some of us are never happy with a great deal. Some people, it seems, just love to pee on a parade. We ought to be happy that people like Charlie may exist, if only in our dreams. Just saying.