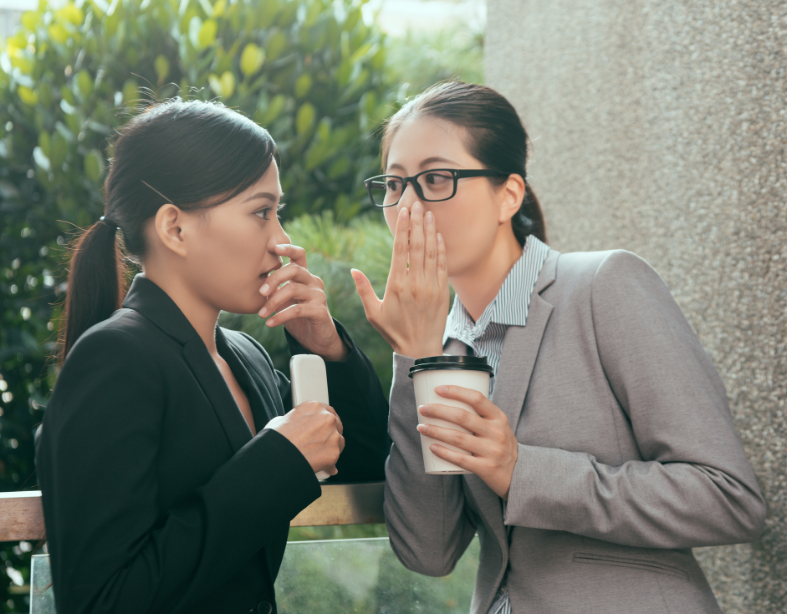 This summer I will re-run some of our most popular topics. There are timeless principles that are worth bringing to the forefront. This one is great to keep conflict at bay in your workplace.

Gossip is something I’ve been dealing with from all sides these past few weeks. Workplace gossip is rampant. So let’s take a moment to dig into gossip and see what it’s made of.

Gossip is always negative. If you’re talking trash about someone behind their back to someone else, you’re gossiping. On the other hand, if you’re speaking positively or highly of someone and they’re not present, you’re praising. However, in all honesty, praise is likely not occurring in environments that are rampant with gossip. There’s a connection here, but I will address that in another article.

Is there a difference between gossip and venting? In my opinion, no. The term ‘venting’ is generally used to describe blowing off steam when difficult emotions are running high. The problem is that most people ‘vent’ about someone to someone else. That’s gossip. Now your issue is off your chest but onto someone else’s, and the person that you gossiped about is still unaware of the specific issue they caused you to vent about in the first place. Venting to the wrong person is just blowing hot air. Why not tackle the issue itself? Vent to the person you’re upset with. Hit it straight on and put it to rest immediately.

If we can break it down into a few simple points, gossip is always negative and discussed in absence of the person that it concerns; venting, while temporarily gratifying, is no more efficient. Addressing the person responsible for the issue at hand is ideal. That’s what I call challenging conversation or feedback.

Through my work as a conflict resolution facilitator, I often have conversations about gossip which have made me realize that sometimes people even gossip about others who have caused no issue or negativity at all. Sometimes gossipers are just envious. Don’t get hooked into it.

If you gossip, the people you’re speaking to will wonder what you’re going to say about them when they’re not around. In effect, you set yourself up to be mistrusted.

One quick way to ensure that you’re not gossiping is to always speak about people as if they were in the room or included in the conversation.

Why do people gossip? People are just not courageous enough to have the right conversations with the right people to make sure that they aren’t gossiping.

The solution is to practice. Practice on me. Practice on big people—that is, people who are mature enough to have an adult conversation. Practice your skills by asking the other person permission to have a real, honest conversation with them. You’ll make mistakes, but you’ll learn from them too. You can always tell someone that you’re not sure how to talk about the subject in the best way possible, but that you didn’t want to gossip about them by telling someone else.

Another, faster solution is to reach out for help. This will help you rid yourself of fear so you can stand up with integrity and have challenging conversations in a good way. You may have some cleaning up to do, but there’s no better way than to have a process facilitated for you so that you and those you’re tempted to gossip or vent about, can create something healthy and new!

Remember your greatest leadership day is with Penny Tremblay.

Set Boundaries that Deal with Difficult Employee Behaviors
Jul 23, 2020 11:57 AM
Comments
We welcome your feedback and encourage you to share your thoughts. We ask that you be respectful of others and their points of view, refrain from personal attacks and stay on topic. To learn about our commenting policies and how we moderate, please read our Community Guidelines.