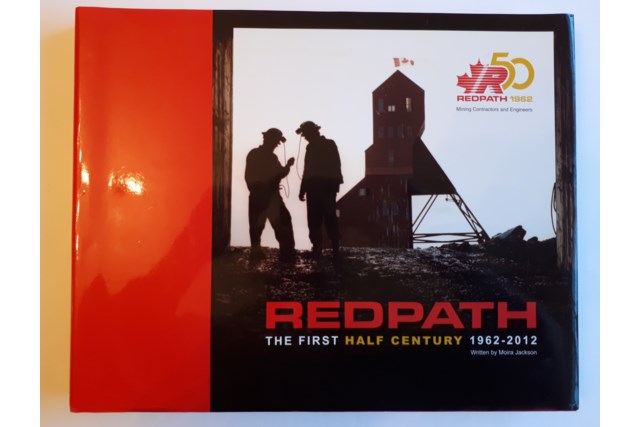 Redpath: The First Half Century, 1962-2012,
Commemorative Book by Moira Jackson

Used book, hardcover 14 x 11 x 1 ¼ inches, excellent condition, some dedications on inside page.
To commemorate their fiftieth anniversary in 2012, The Redpath Group commissioned a book to tell their history as global mine contractors and engineers. Several years in the making, the result is a large and impressive 368-page, full-colour book that explores the company’s development from the one-man operation that Jim Redpath started in 1962, to the billion-dollar international company it is today. 368 pages, full colour imagery and text.
Author: Moira Jackson is a writer, editor, researcher, and teacher who has worked at Queen’s University’s School of Business in many different capacities since 1975, after a brief early career in actuarial work. Moira began writing about mining in 1989 when she was appointed Associate Director of the Queen’s Centre for Resources Studies, a research institute specializing in economic and policy issues related to the mining industry. She has edited approximately forty books over a wide range of subjects.
$35 pickup.
***NO EMAILS***
Call or text Bob at 705-493-8050 in NORTH BAY, Ontario.

R Ask Robbert About This Listing