Guy Carriere said he felt profoundly discriminated against after the owner of a Sudbury business told him the police would be called if he and his service dog showed up again
Sep 6, 2017 10:19 AM By: Matt Durnan 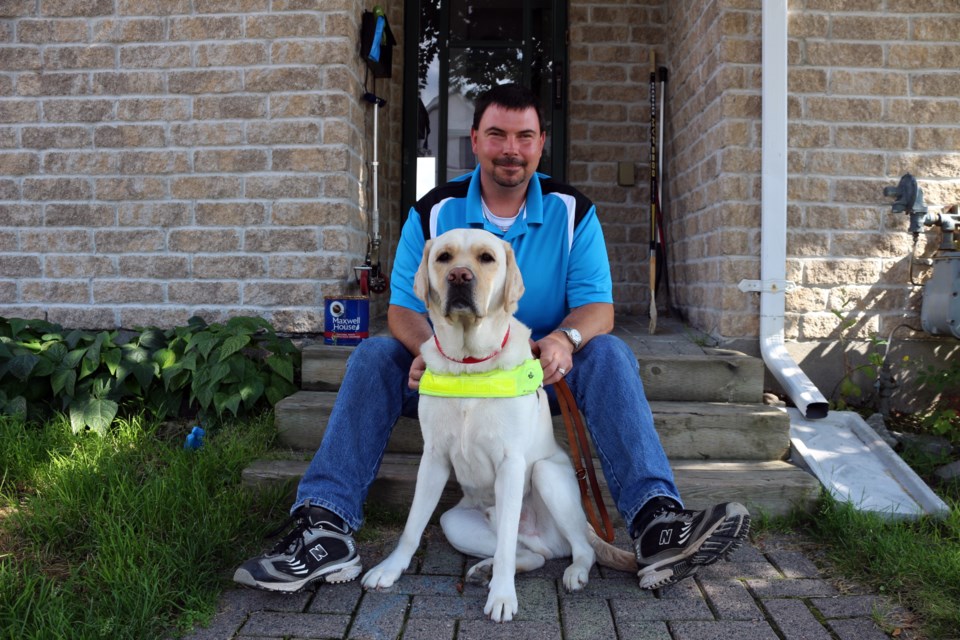 Guy Carriere and his service dog, Dixon were asked to leave a local gas station on Aug. 16. (Matt Durnan/Sudbury.com)

SUDBURY — Guy Carriere's sense of independence has grown by leaps and bounds since acquiring his service dog, Dixon, a little over a year ago.

Carriere has been blind since birth and was a white cane user up until about a year ago when Dixon came into his life. The change to his lifestyle and feeling of autonomy have been significant, he told Sudbury.com.

But it hasn't been all smooth sailing.

On Aug. 16, the lifelong Sudburian had a less than pleasant experience at a local gas station, an experience that left him with a profound sense of discrimination.

Carriere said he and his son were waiting for a bus to take them home, along with Guy's guide dog, Dixon.

"We had some time before the bus arrived so we decided to go into the gas station to grab a drink and some snacks," said Carriere.

"We were in the aisle and I heard the store owner say something, but I wasn't sure if he was talking to me. He repeated himself and he was asking me to take my dog outside."

Carriere explained to the store owner that Dixon was his service dog and that he was permitted to have him with him inside of the store. The store owner persisted, however, claiming that Dixon had been licking and chewing bags of potato chips and that Carriere would have to pay for them.

"He's a very well-behaved dog, and I keep him close by me at all times," said Carriere. "My son was with me as well and he swears that he never saw Dixon damage and products on the shelves."

It was at this time that Carriere and his son and Dixon opted to leave the store and not purchase anything. On the way out of the door, the owner made a comment that left Carriere with a bitter taste in his mouth.

"He told me that if I ever came back in his store with Dixon he would call the police," said Carriere. "I've never encountered a situation where someone was that negative."

Carriere said he insisted the store owner review the Accessibility for Ontarians with Disabilities Act (AODA) and familiarize himself with the rights and responsibilities of both business owners and the owners of service dogs.

In a nutshell, the act makes it illegal to deny accommodation, services or facilities to a person with a disability who uses a service dog to go about their daily life. In short, you can't discriminate against someone for having a service dog.

Carriere said he tries his best to be courteous when out with Dixon and is cognizant to the fact that the dog may not be welcome in some places.

"If I'm going to a hotel, I will always call ahead to make sure that it's ok, and it's never been a problem," he said. "The only time so far really was when I took my son to African Lion Safari and they said they would rather Dixon not be there, which is understandable."

Dixon has afforded Carriere a new level of independence and he hopes that no other Sudburians in his situation will have to go through what he did on Aug. 16.

"My independence has gone through the roof since I got him, I do things now that I never would've done before. I was never really comfortable going out unless it was for something that I absolutely needed," said Carriere.

"I would've never just got up to go for a walk like I do now with him, it's totally different now. It's just upsetting that something like this had to happen, in a country and city as diverse as ours, that there's still discrimination like this."

According to Carriere, he's just the sixth Sudburian to acquire a service dog, and he's urging owners of service dogs, as well as business owners to familiarize themselves with the AODA.

"I think that this is something that goes beyond just people with service dogs," said Carriere. "I just don't want something like this to happen to other people."

CANADA: Winter drownings may increase as ice thins with climate change
Dec 5, 2020 9:25 AM

WORLD: How COVID-19 mutations in animals affect human health and vaccine effectiveness
Dec 4, 2020 8:55 PM
Comments
We welcome your feedback and encourage you to share your thoughts. We ask that you be respectful of others and their points of view, refrain from personal attacks and stay on topic. To learn about our commenting policies and how we moderate, please read our Community Guidelines.

About the Author: Matt Durnan