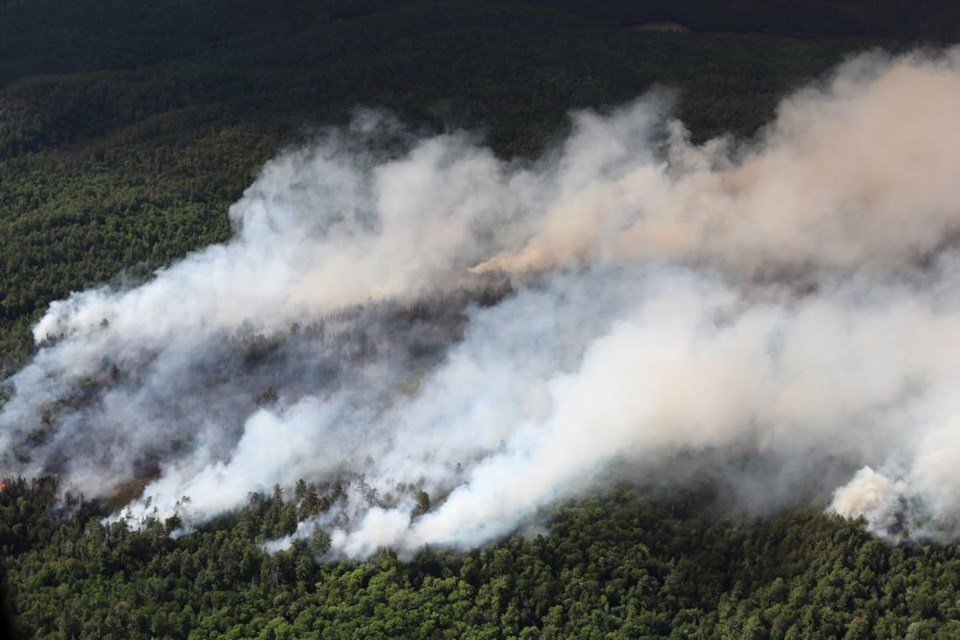 The Parry Sound 33 fire was discovered on July 18 and eventually grew to more than 11,000 hectares forcing road closures and evacuations. It was finally delared out on Nov. 1. (File)

SUDBURY - Forest fire season is probably the farthest thing from your mind the day after Halloween, but the Ministry of Natural Resources and Forestry tweeted some good news for you: the Parry Sound 33 fire is officially out.

You might be thinking to yourself: Wait, wasn't it declared out back in August? Not so, actually. On Aug. 23, the ministry declared the fire was finally under control, but firefighters have been dousing hotspots and monitoring the area of the fire ever since.

With the declaration the fire is out, the MNRF said there are no longer any active fires burning in Ontario.

Fire #ParrySound33, which had been discovered on July 18, has now officially been called #out. It measured a total of 11,362.5 hectares. There are no longer any active #forestfires in #Ontario! pic.twitter.com/IDwQ2aUYS4

What was Parry Sound 33?

Parry Sound 33 was massive forest fire that was discovered on July 18 grew rapidly to more than 11,000 hectares in less than a month, forcing evacuations, road closures, and bringing in firefighters from around the country and beyond to help battle the blaze.

Sudbury musician JoPo wrote a song and released a music video on Aug. 5 inspired by the efforts of firefighters.

On Aug. 9, area residents received some welcome news as the fire's status was dialled back from "not under control" to "being held".

Two weeks later, on Aug. 23, the fire has officially been declared "under control".

"Being held is with the projected weather as well as the resources being dedicated, the fire is not likely to spread," said Tanya Kienapple, fire information officer with MNRF. "When it's classified as under control they're confident that it's not going to spread."

Crews spent months mopping up the fire by locating and extinguishing hot spots. At one time, the blaze had more than 1,400 firefighters and support staff battling to keep it at bay. A handful of crews were kept in the area to monitor the fire.

BEYOND LOCAL: Tips for sleeping better during a global health crisis
Jun 2, 2020 8:55 PM

COVID-19: Ontario mulls collection of race-based data
Jun 2, 2020 4:20 PM
Comments
We welcome your feedback and encourage you to share your thoughts. We ask that you be respectful of others and their points of view, refrain from personal attacks and stay on topic. To learn about our commenting policies and how we moderate, please read our Community Guidelines.