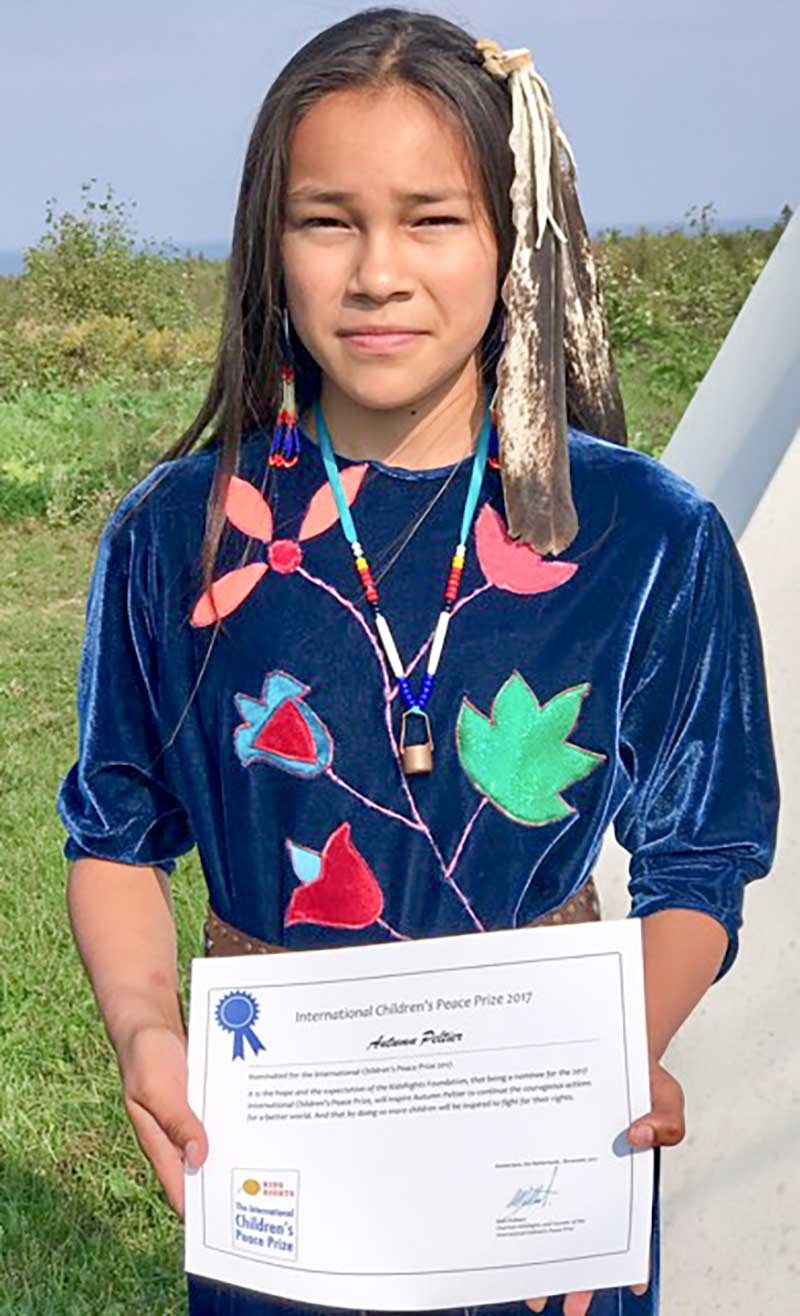 Autumn Peltier of Wiikwemkoong has been nominated for the 2017 International Children’s Peace Prize. Out of 169 nominees, she is the only Canadian. (Supplied)

WIIKWEMKOONG - Autumn Peltier of Wiikwemkoong has been nominated for the 2017 International Children’s Peace Prize. Out of 169 nominees, she is the only Canadian, according to an article in The Manitoulin Expositor.

“Autumn Peltier has been an advocate for the right to clean drinking water and water in general because it is sacred,” said Wiikwemkoong Chief Duke Peltier.

“She has expressed her concern against Kinder Morgan’s expansion of the Trans Mountain Pipeline to the Prime Minister of Canada, the Honourable Justin Trudeau. As a result of her advocacy, she signed a Treaty at the Assembly of First Nations meeting in Regina to fight the Kinder Morgan Pipeline and protect grizzly bears. She is relentless in her fight for the environment. I hope all Canadians will show support to Autumn by using social media and give her the recognition she deserves.”

Autumn is 13 years old and a Grade 8 student at Pontiac School in Wiikwemkoong.

“I was really excited when I found out I had been nominated,” Autumn told The Expositor. “It is a huge honour. My Auntie, Josephine (Mandamin), has really inspired me to advocate for water. She is getting older and if I don’t (advocate), who will for future generations?”

Autumn has made national headlines since being nominated for the Children’s Peace Prize, being interviewed by CTV, CBC and APTN, among other media outlets.

“I’m doing okay,” said Autumn of all the attention and interviews. “It has been busy but I know that it is helping to get the message out there about the importance of water.”

“She is handling it all really well,” said Autumn’s mom Stephanie Peltier. “She is very busy and has been asked to speak at several upcoming events, but she is remaining calm and focused.”

Ms. Peltier said that they discovered Autumn had been selected as a nominee in September.

“I couldn’t believe that she was the only Canadian to be nominated,” said Ms. Peltier. “The other nominees are mostly from Europe, but there are so many great kids doing wonderful things in this country. Autumn being the only Canadian and First Nation nominee is a huge honour and responsibility, but one she is ready to take on.”

Autumn was featured in the October 2016 edition of Canadian Living Magazine for her passion as a clean drinking water advocate which has earned her the 12 and under Canadian Living ME to We Youth in Action award.

As well, Autumn, along with fellow Wiikwemkoong youth advocate Francesca Pheasant, were chosen to represent Canada at the 2015 Children’s Climate Conference in Sweden where they shared their concern about climate change and presented a communiqué on behalf of the 64 youth in attendance to the Swedish Environment Minister and Deputy Prime Minister Asa Romson.

Last year, Autumn attended the 2016 Winter Meeting of Canada’s Premiers in Vancouver, helping Josephine Mandamin during her water ceremony, singing a water song during the ceremony and sharing her concerns about climate change and the future of water with Prime Minister Justin Trudeau at a special dinner following the meeting.

When Autumn isn’t advocating for clean water and protecting the sacred gift of water for future generations, she enjoys running and was a member of Team Ontario at the North American Indigenous Games this past summer.

“I try to keep balance in my life—getting enough sleep and eating well,” said Autumn. “I also like writing, hanging out with friends and playing with my pets.”

“The internationally acclaimed prize is awarded annually to a child who fights courageously to promote the rights of the child,” a press release from KidsRight’s Foundation, which founded the International Children’s Peace Prize, states. “KidsRights’ initiative has become a global phenomenon. Submissions from no less than 55 countries were entered this year, which marks a second record achievement for 2017. KidsRights will announce the three finalists on 15 November. In line with tradition, the prize will be awarded by a Nobel Peace Laureate in the presence of the world press on December 4 during a ceremony in the renowned Hall of Knights in The Hague, Netherlands.”

“Out of the 169 children most nominees hail from Guatemala (13),” continued the release. “Fifty-five children are involved in the child rights theme child participation, followed by education (51) and health (17). This is just a sampling of a great variety of issues for which these children have raised awareness. Although they act on myriad subjects, these remarkable changemakers have something important in common: they have all achieved global impact by raising their voices on behalf of their peers.”

This is the 13th year for the International Children’s Peace Prize.

“Even if I don’t win, I will keep going on with my work—I will keep advocating because it is important,” Autumn concluded. “It is a huge honour just to be nominated.”

For more information about the Children’s Peace Prize, visit childrenspeaceprize.org.