Lougheed may seek to recover court costs after Tuesday's acquittal
Oct 25, 2017 9:33 AM By: Darren MacDonald 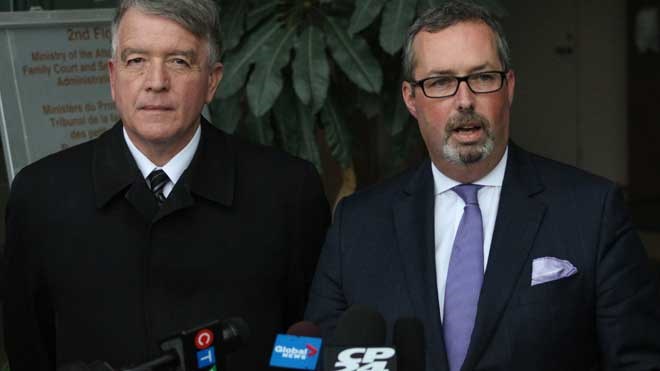 Minutes after Gerry Lougheed Jr.'s acquittal on bribery charges Tuesday, lawyer Michael Lacy was asked whether his client would seek to recover what must have been considerable legal costs.

"It's premature to talk about those things right now. Obviously, we're just digesting the entire process. We'll make decisions about what we will and will not do moving forward in due course."

It was the second time Lougheed faced charges in the case. Criminal charges – also defended by Lacy – were stayed in April 2016. On Tuesday, Justice Howard Borenstein agreed with the defence's motion for a directed verdict, acquitting both Lougheed and Patricia Sorbara without the defence having to mount arguments.

When the decision was announced, Sorbara could be seen tearing up as she hugged her lawyers. Lougheed's partner, Louise Paquette, also wiped away tears as she hugged him.

Speaking to reporters Tuesday, Lacy made it clear he believed the entire case was driven by politics, rather than the facts.

"From our perspective, obviously, this is a complete vindication. It also raises questions about why they prosecuted this matter to begin with ... If I was a citizen, as I am, of Ontario, like the rest of us are, I'd be wondering about this case, the money that went into this case — why it was wasted on the investigation and wasted on this prosecution?

As has been well documented, Lougheed and Sorbara were recorded by former Liberal candidate Andrew Olivier in December 2014 trying to convince Olivier to support Glenn Thibeault, who ran and won the 2015 byelection in the city.

Olivier went public with the discussions, and later released the recordings. He records conversations because, as a paraplegic, he can't take notes. He was paralyzed as a result of a hockey injury when he was 14.

Lougheed said he has no regrets about the language he used in the recordings, in which he encourages Olivier to see what he could get for backing Thibeault – jobs or appointments from the Liberals.

"I really hope in the future, he continues to provide leadership and light to our community."

"This was not Andrew Olivier's doing," Lacy added. "He's not the one that caused us to get where we are."

Brian Greenspan, lawyer for Sorbara, said Borenstein's ruling is as close to a verdict of innocence as there exists in Canadian law.

"A total vindication, a total exoneration, a total demonstration that these charges ought never to have been brought," Greenspan told reporters. "There simply was no dishonesty, no wrongdoing, no corruption and a clear finding that what was done simply in the ordinary course of work that both Ms. Sorbara and Mr. Lougheed were doing."

In his 44 years practising law, he said directed verdicts like this have happened less than 10 times.

"These are rare events and they occur when prosecutions ought not to have been brought at the outset," Greenspan said.

Sorbara also said she has no regrets and was just glad the trial was over.

"I'm just grateful that this day has come — I always knew the law would make the right decision,” she said. "I have no regrets today. I'm happy with today.

"It's over and we're finished. It was a long time coming."

A news release from the Liberals welcomed the former campaign chair back to the fold, and Sorbara said that she will "serve at the pleasure of Premier Wynne and the co-chairs. There's discussions to be had there."

When asked if he would be involved again with the Liberals, Lougheed demurred.

"I'll have to think about that," he said.

COVID-19: Can you save money working from home?
Sep 25, 2020 8:55 PM
Comments
We welcome your feedback and encourage you to share your thoughts. We ask that you be respectful of others and their points of view, refrain from personal attacks and stay on topic. To learn about our commenting policies and how we moderate, please read our Community Guidelines.