Outlaw motorcycle gang has erected signage on the front of its new Simpson Street clubhouse and police say they are aware the criminal organization is branding itself, 11 years after it was taken down in Thunder Bay during Project Husky.
Nov 3, 2017 9:04 AM By: Leith Dunick 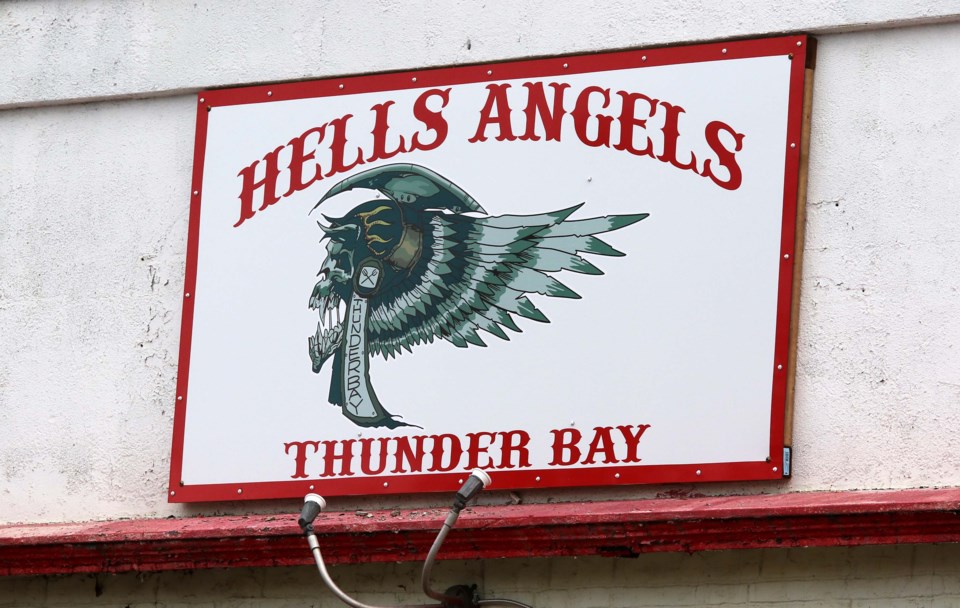 The Hells Angels have put out a sign announcing their presence on Simpson Street (Leith Dunick, tbnewswatch.com).

THUNDER BAY — After 11 years in the criminal hinterlands, the Hells Angels is making its presence known in Thunder Bay again.

The outlaw motorcycle gang has erected a large sign outside its Simpson Street clubhouse, located next to the Underground Gym in the rundown neighbourhood on the city’s south side.

Thunder Bay Police Staff Sgt. Ryan Gibson says the organization has had a presence in Thunder Bay for quite some time, but after their former clubhouse was raided in 2006 during Project Husky, the local chapter was frozen.

Now it appears to be back in business.

“At the end of the day, like any other organized crime group, they’re here for a specific reason and with them branding is important,” Gibson said.

“What we see that’s gone up is their death head sign on Simpson Street. And as we know, when people see the patch and see those things, there’s a reason that’s done with these criminal organizations, and that’s obviously to facilitate the various criminal opportunities they’re involved in.”

Certainly they’re not advertising any specific criminal activities they might be engaging in, but it does send a message to the community.

“When you see that patch, people know who they are,” Gibson said. “That’s what it’s all about. They’re sending a message to other competitors, to the general public that they mean business. They’re here for a reason, and it’s not a good one.”

Project Husky was a two-year investigation that resulted in the arrest of five full Hells Angels members, one hanger-on and 21 associates of the motorcycle gang.

During the operation, a number of drug seizures, including cocaine, marijuana, percocets and oxycontin were seized, with a street value exceeding $2.3 million.

A total of 15 search warrants were executed on Jan. 18, 2006, resulting in the seizure of weapons, stolen property and cash.

Gibson was reluctant to say whether or not the local Hells Angels chapter has elevated its activities in recent months.

“But we’re going to treat them like any other organized crime group. As far as activities increasing or decreasing, I wouldn’t be able to comment on that.”

Police also did not say how many active members are involved in the resurrection of the Thunder Bay chapter.

About the Author: Leith Dunick

A proud Nova Scotian who has called Thunder Bay home since 2002, Leith has been the editor of Thunder Bay Source for 18 years and has served a similar role with TBNewsWatch.com since 2009. Twitter: @LeithDunick
Read more