Federal government asked the former Supreme Court Justice and United Nations human rights commissioner last week to lead a year-long review of the military’s approach to preventing and punishing sexual crimes and behaviour
May 3, 2021 11:20 AM By: Canadian Press 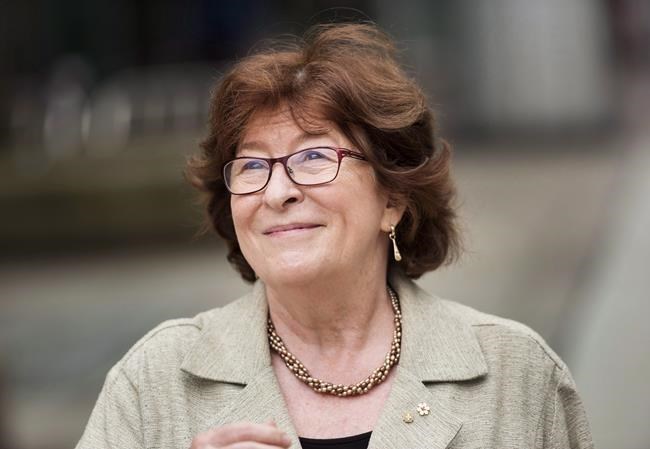 OTTAWA — Louise Arbour believes that after years of failed efforts and misfires, the time is finally ripe for real progress in the Canadian military’s fight against sexual misconduct.

And the former Supreme Court Justice and United Nations human rights commissioner with a reputation for speaking truth to power, says if she didn’t believe that or the federal government’s commitment to act, she wouldn’t have agreed to help with the fight.

“There's been huge disappointment, and I suspect there's probably a lot of skepticism about whether this exercise is going to make any difference,” Arbour said in an interview with The Canadian Press. “If I didn't believe that it could and will, I wouldn't be bothered.”

The federal government tapped the 74-year-old Arbour last week to lead a year-long review of the military’s approach to preventing and punishing sexual crimes and behaviour following months of outrage over the conduct of its very top commanders.

The list of those caught up in the issue expanded Sunday to include Maj.-Gen. Peter Dawe as he was relieved as commander of Canada's special forces for writing a character reference four years ago for a soldier convicted of sexually assaulting a comrade's wife.

Brig.-Gen. Steve Boivin, who was to take over as special forces commander this summer, instead moves immediately into the position. Though he was to move into a new senior advisory position, the military now says Dawe’s future remains undecided.

“These are difficult times for us as an institution, and for many who continue to suffer," he said. "That suffering is inflamed through a sense of betrayal, and I recognize that it is real.”

Much of that sense of betrayal stems from the fact some of those commanders now accused of sexual misconduct were among the military’s loudest voices in promising action after another former Supreme Court justice revealed the scale of the military’s problems in 2015.

The fact that the government and Armed Forces refused to act on Marie Deschamps’s key recommendation to set up an independent centre to monitor the military’s handling of cases and hold it accountable has also contributed to anger and skepticism about their commitment.

Arbour, who has previously worked as an adviser as the Liberal government developed its 2017 defence policy, admits to having her own questions about another review when the government reached out to her this time around.

She now sees her role as building off Deschamps’s report, which was instrumental in laying out the scope and scale of sexual misconduct in the military, by now coming up with a real way to fix the issue.

“This is an opportunity to go beyond what Marie Deschamps said, which is: ‘You must create an independent, an external center,’ but to maybe try to flesh out what exactly this should look like,” Arbour said. “In that sense, this could be chapter two.”

There are several other reasons to believe her review is different from Deschamps’s and will lead to real change, Arbour added, noting it will study the military justice system and take a close look at how military commanders are selected and trained.

Yet perhaps most important is the level of public attention on the issue right now — and Defence Minister Harjit Sajjan’s commitment to act upon whatever recommendations Arbour makes.

Arbour previously led an investigation of the Prison for Women in Kingston, Ont., following years of controversy at the institution. Her landmark report in 1996 prompted its closing and resulted in numerous changes to how women are treated in federal prisons.

“I wasn’t the first one that said this prison had to close, but sometimes you arrive at a time when the system is right, public opinion is sufficiently engaged, that change can happen,” she said.

“This is one of these opportunities with a very public commitment that this external, independent, comprehensive review will produce recommendations that will be implemented.”

While senior commanders have responded to the current controversy with expressions of openness to external oversight, the military has shown a history of resisting such monitoring and accountability, preferring instead to deal with issues internally.

Arbour noted police forces, medical associations and others all believe they are best placed to police their own members, but suggested resistance to external scrutiny is even more acute in the military due to the way troops live and work in close proximity.

Yet while that has also contributed to some skepticism, Arbour said she is keeping both an open mind and a determined focus to get on with the fight.

“I certainly understand fully the impatience of those who are directly implicated women, some of whom have spoken out more than one, others who have yet to speak out because they have no trust in the system,” she said.

“There's skepticism and cynicism, and impatience and so on. I have nothing more to say then: ‘But then what? Are we just going to do nothing because we did something and, six years later, we're not quite there yet?’”

This report by The Canadian Press was first published May 2, 2021.