CANADA: This student racked up $100k in student debt — here’s how

The problem of debt will keep growing as the cost of tuition keeps hiking upward
Sep 20, 2019 9:25 AM By: Global News 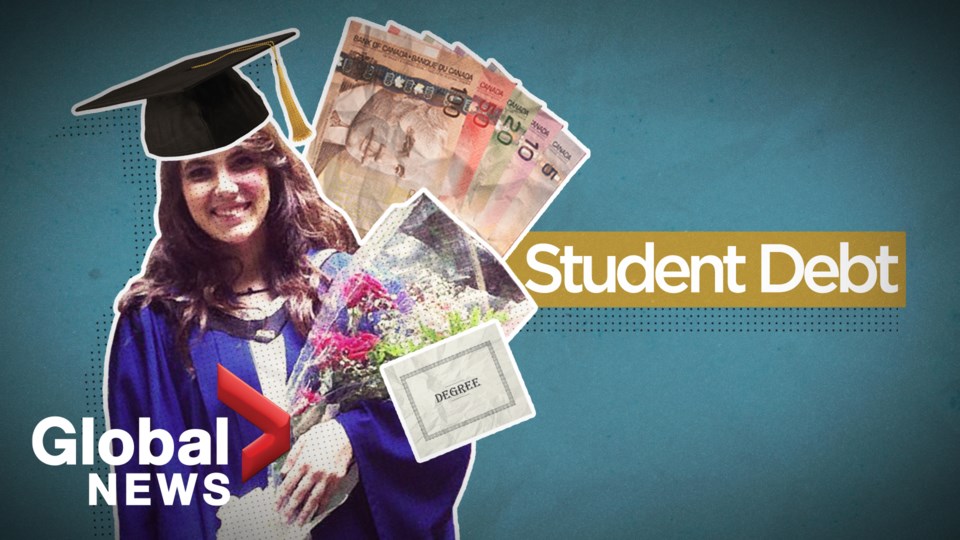 When some of us think of the words “imaginary” and “scary,” our minds may run wild as we think of fire-breathing dragons and other figments of our fantasies.

But when Alexandra Fox says these, she’s referring to her debt, which is, in fact, real — even though she feels it’s so big that it’s a number she’ll “never actually touch.”

Fox is still in school, currently studying occupational therapy, but she says her program is so intense that she has no time to work, meaning she will have to deal with her debt when she graduates.

The reason she’ll have so much to owe when leaving school is this master’s is not the only expensive piece of paper she has pursued. She also switched her line of study three times, and this has left her with her “scary” six-figure debt.

How Alexandra Fox racked up $100,000 in student loans: a timeline

For Fox’s degree, she got a line of credit for $10,000 to pay for extra things like rent and food.

“I actually didn’t have to have any student debt for my first degree,” said Fox. “I was extremely privileged to have my parents pay for it.”

She is now pursuing her second master’s — this time, she’s studying occupational therapy. This is the most expensive part of her education (and, she says, will soon be the most expensive piece of paper she owns), priced at $32,000. For this, she got an $80,000 line of credit, absorbing the $25,000 she already owed, and she added on another $25,000.

It’s a number that may feel, as Fox says, unreal, but she says when it comes to being this deep in the red for going to school, she’s far from alone.

“The majority of my friends all have student debt,” she says, “and it’s funny that we don’t really talk about it because some of my friends have managed to pay off most or all of it.”

She continues, “Other friends of mine are in the same situation as me, where they are … negative $100,000.”

The state of student debt in Canada

Fox and her friends’ debt are only small slices of what all Canadians owe in student loans, which is $36 billion, according to the Canadian Federation of Students.

The problem of debt will keep growing as the cost of tuition keeps hiking upward. A typical undergraduate student pays more than $6,000, which is 30 per cent more than students did a decade ago.

The only recent time the average tuition fee actually dipped was this year thanks to Ontario, where tuition was slashed by almost $900.

When studying this upward trend, Doug Hoyes, a licenced insolvency trustee, used the same word Fox did when she looked at her personal debt — “scary.”

“It worries me that we are forcing teenagers at the age of 17 to be picking universities and university courses and colleges and not fully understanding what the full costs are,” said Hoyes, the co-founder of Hoyes, Michalos & Associates Inc.

“It’s only when they’re done that they realize they’ve got a significant student loan and they’re not able to find a job earning enough to repay that debt.”

How students can help pay off their debt

Bridget Casey, who runs moneyaftergraduation.com, says she paid off more than $20,000 in student debt within 22 months of graduating from her bachelor’s degree — and she says others can do it, too.

“You want to attack your debt aggressively off the bat,” she said, even if it means living in a not-so-ideal apartment to pay it off.

She says those who don’t find a decent job within the first two years of graduation are the ones who get stuck, as it’s hard to find good employment after that. She advises students to focus on their careers once they graduate because this will generate more money in the long run.

Casey also encourages people to find a part-time job and to send all of this income to paying off the debt.

She says that if someone is already working on paying off their debt, they can go at their own pace — they can log directly into the federal or provincial government website to adjust payment terms and pick a lower monthly payment.

Another word of advice she has — if you have debt, try not to blame yourself.

“There is this narrative that’s very popular that millennials are just irresponsible with their money, either buying avocado toast [or] … overspending on vacations for Instagram,” she said.

So, what’s Fox going to do about her debt?

Fox is nearly ruling out working in Canada, and she is now aiming to work in the U.S. after she graduates. She’ll get paid in American dollars, and the average salary for an occupational therapist is higher south of the border at $85,000.

Her plan is to pay back up to $1,000 per month, and at that rate, it will take her just over eight years to pay back her “imaginary” school debt.

“I’m still in school,” said Fox, “so I feel like when I’m working and I actually am starting to make those payments, it’s gonna feel a lot more real.”

CANADA: Can you afford that puppy? Pet ownership can be costly, so budget before you adopt
Aug 4, 2021 9:25 AM