Tam was addressing concerns that Canadians will have to get in line behind other countries to wait for the COVID-19 vaccine
Jul 28, 2020 8:55 PM By: Canadian Press 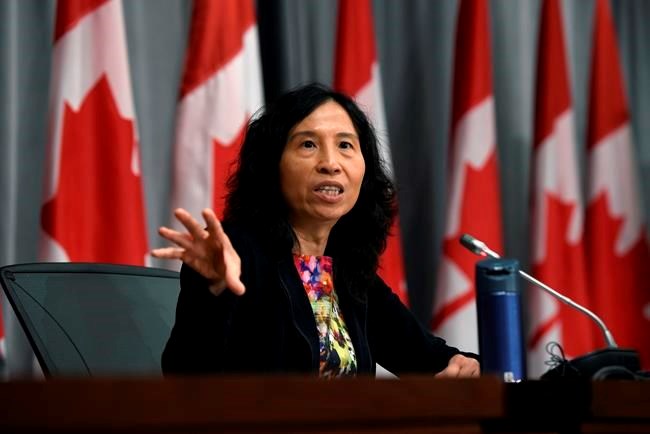 She said an independent vaccine task force is advising the government on options for Canada's choice of vaccine, including exploring the possibility of manufacturing a potential pandemic cure at home.

Tam was addressing concerns that Canadians will have to get in line behind other countries to wait for the COVID-19 vaccine.

One senator and some health-care professionals are asking why Ottawa is delaying a decision on the $35-million pitch by Toronto-based Providence Therapeutics to begin human trials of a new, experimental vaccine technology that has been heavily funded in the United States.

Providence says it could deliver five million doses of a vaccine to Canadians by mid-2021 if its trials bear fruit, but it can't move forward with testing or manufacturing without funding.

At a media briefing in Ottawa, Tam said the task force is an independent body comprised of "people who have been experienced in the areas of vaccination, infectious disease but also in the area of vaccine development and that sort of industry knowledge."

"Their role is to provide advice," said Tam. "How the money is spent is up to the government itself."

Providence's chief executive Brad Sorenson has told The Canadian Press he has yet to hear back from the government since late May after his company submitted its proposal in April, and after the government reached out to it as a possible vaccine-maker.

Health-care professionals have also written to Bains to urge him make up his mind on the April proposal. Bains spokesman John Power has said he couldn't comment on specific proposals but said the evaluation process is ongoing.

Meanwhile, Canada has been experiencing an uptick in COVID-19 cases in recent weeks as more people circulate in warm summer months and with the provinces allowing more economic activity.

Tam says there has been a worrisome rise in COVID-19 infections that may have been fuelled by larger-than-recommended Canada Day gatherings.

"The Canada Day long weekend may have resulted in some big parties in certain areas of the country. Those social gatherings have accelerated the cases," she said.

This report by The Canadian Press was first published July 28, 2020.

COVID-19: Office furniture shortages loom as Canadians stay home this fall
Sep 18, 2020 8:55 PM
Comments
We welcome your feedback and encourage you to share your thoughts. We ask that you be respectful of others and their points of view, refrain from personal attacks and stay on topic. To learn about our commenting policies and how we moderate, please read our Community Guidelines.