Voodoos make a pair of trades

'Austin is a player that can play with pace and his hard-working attitude will be a benefit especially to our younger forwards'
Sep 6, 2020 5:00 PM By: BayToday Staff 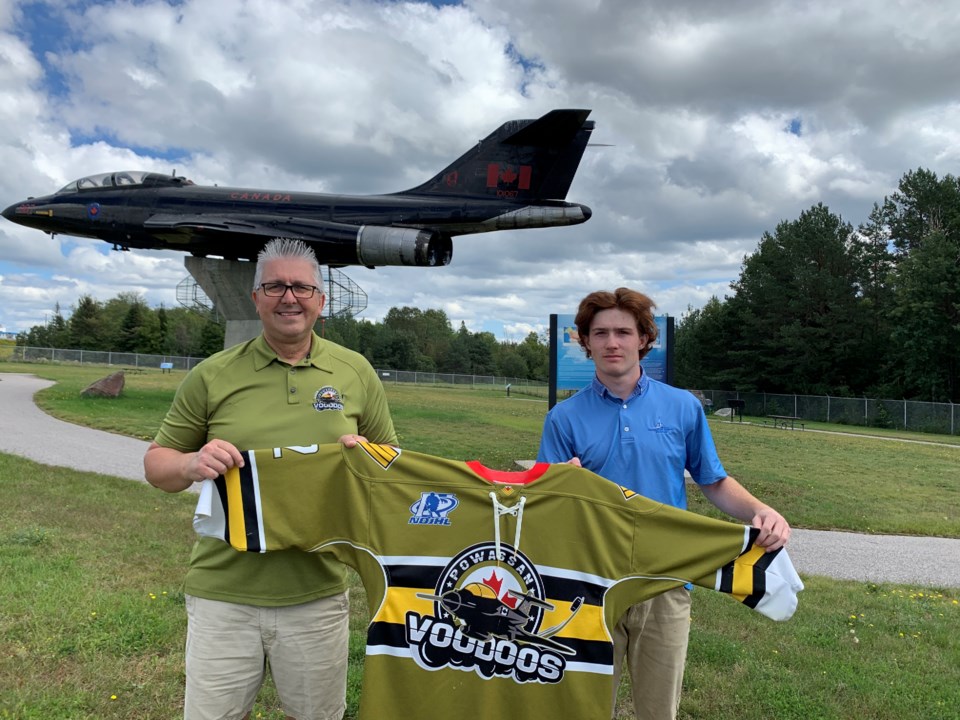 Voodoos GM Chris Dawson (left) and new Voodoos forward Austin Holmes (right) both stand in front of a CF-101 Voodoos Jet at CFB North Bay. Photo by Caleb Dawson.
The Powassan Voodoos have made a pair of trades this week acquiring a veteran forward while moving out a returning defenceman.

The Voodoos acquired 2000 birth year forward Austin Holmes from the Navan Grads in the CCHL for a development fee.

Holmes spent an injury-riddled 2019-20 season with the Kanata Lasers of the CCHL and the Renfrew Timberwolves of the CCHL2.  With the Lasers the South Porcupine, Ontario product netted two goals and three assists for five points in 23 games, and then added 2 goals and 1 assist in two games with the Timberwolves.

"I had a tough season last year dealing with injuries for most of the season," admitted the Porcupine, Ontario product.

"This year is my 20 year season and I’m feeling much more confident in the physical aspect of my game and I’m ready to put the work in on the ice. When I heard the Voodoos were an option for me I knew it was the right fit for me as a hockey player with the style of game the Voodoos play.

Chris Dawson, the Voodoos GM, says Holmes was identified as a top prospect when he played his final season of midget with the Timmins Majors.

"Our northern scout identified Holmes that season but Austin opted to play closer to home with the Rock, which we respect," noted Dawson.

"Austin is a player that can play with pace and his hard-working attitude will be a benefit especially to our younger forwards."

The Voodoos also dispatched 20-year-old defenceman Noah Brant to the Picton Pirates of the PJHL for a development fee.

The squad, which finished first overall in the NOJHL last season, is still waiting on more direction from Hockey Canada, the OHF, the NOHA and the NOJHL as to when their 2020-21 season will begin.

However, the NOJHL has released information recently noting the season could start as early as mid-October pending the approval from all the respective authorities.

Teen author has fans lined up at book signing
Sep 28, 2020 1:00 PM
Comments
We welcome your feedback and encourage you to share your thoughts. We ask that you be respectful of others and their points of view, refrain from personal attacks and stay on topic. To learn about our commenting policies and how we moderate, please read our Community Guidelines.