A capacity crowd filled the Mattawa Senior Citizens Club for the first Innergex industrial wind farm public consultation meeting on Monday night, where local opposition parties took to the microphone to voice their displeasure with the proposal.
0
Feb 23, 2015 11:56 PM By: Liam Berti 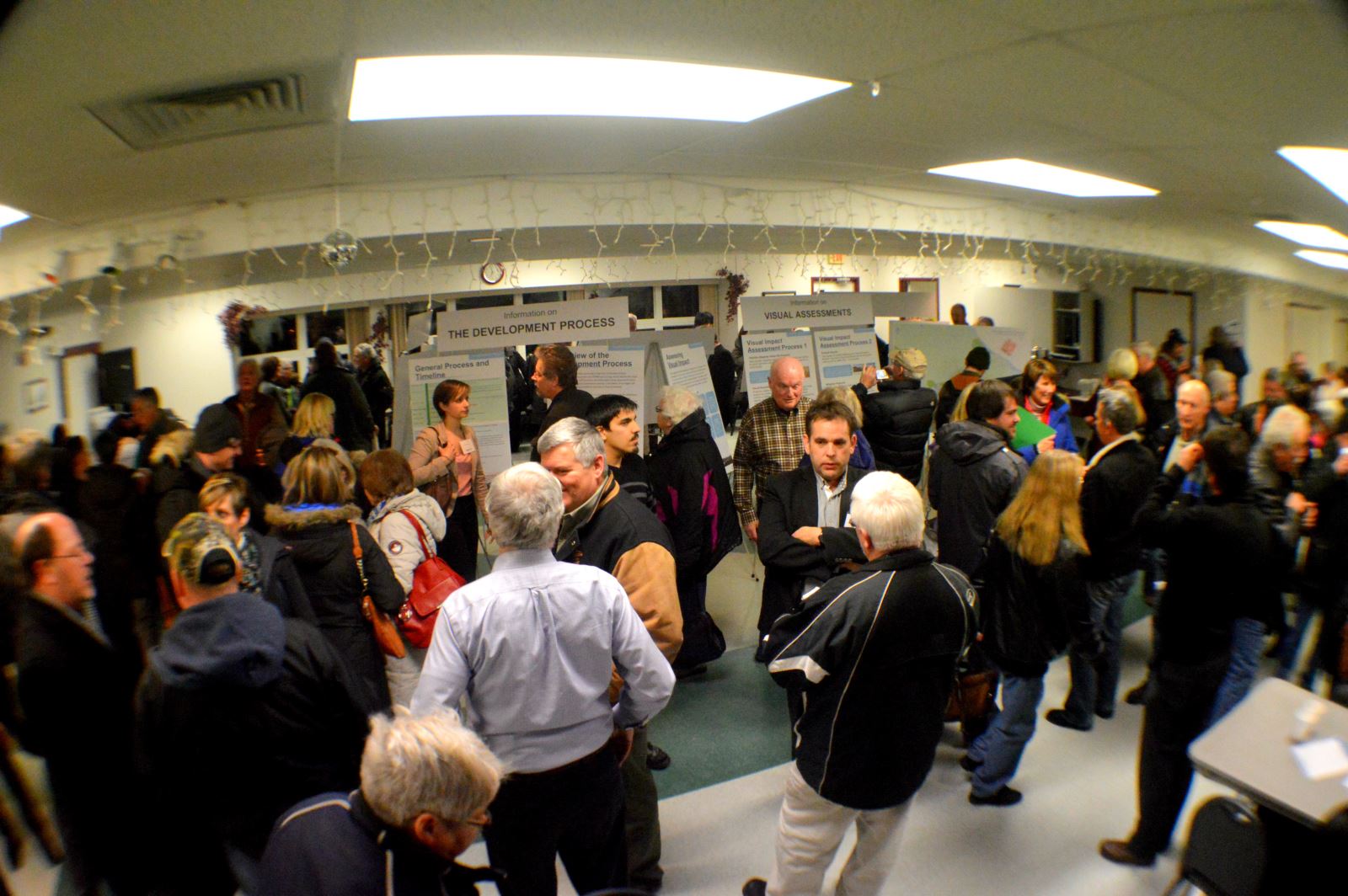 A capacity crowd filled the Mattawa Senior Citizens Club for the first Innergex industrial wind farm public consultation meeting on Monday night, where local opposition parties took to the microphone to voice their displeasure with the proposal. PHOTO BY LIAM BERTI

Can you feel the wind of change?

When it comes to the proposed industrial wind turbine farm for the Mattawa area, many concerned residents cannot.

Innergex Renewable Energy, the Quebec-based company proposing the industrial turbine system, held a public consultation meeting at the Mattawa Senior Citizens Club on Monday night, where a capacity crowd seemed to vehemently oppose what is being put forward.

With Innergex project developers on hand and multiple displays outlining the company’s plans, local representatives took to the microphone and rallied the hundreds in attendance.

The Nodinosi Project, which translates into “spirit of the wind” in the Algonquin language, calls for the installation of 50-60 wind turbines on Crown Land in the Olrig and Mattawan Townships just North of the Mattawa River.

Those turbines, expected to range anywhere between 80-120 metres in height, are anticipated to have the capacity of 150 megawatts.

But the development has catalyzed a strong reaction from local opposition, including the First Nations, the Lake Talon Conservation Association (LTCA), and many area residents.

Innergex has promoted the project in partnership with the Algonquins of Pikwàkanagàn First Nation, who are situated over 200 kilometres from the proposed project site, near Pembroke, Ont.

But the two First Nations who would be directly impacted by the turbines have not been consulted by the developers and have publically stated their disapproval of the proposal.

“We firmly oppose this project, the company involved and the Algonquin group who are willing to sell out the local Algonquins to fill their own greedy ambitions,” said Davie Joanisse of the Antoine First Nation. “We will use every means available to stop this project. That includes protests and blockades.”

Joanisse also referenced the Algonquin Land Claim agreement-in-principle, questioning the provincial government’s audacity to jeopardize their investment in the process to date.

He also challenged the integrity of the Algonquins of Pikwàkanagàn First Nation for their presence in the partnership with Innergex.

“This is a shameful and despicable act against the Algonquins in this area,” said Joanisse.

“They are destroying everything we have worked towards for the last 20 years negotiating,” he added. “They are willing to accept money in exchange for destroying our vision as communities in this area for us and our children."

He also touched on just how important that land is for hunting grounds and sharing with other tourists and locals.

"If this project is allowed to proceed, there will be major impacts to the local tourism industry and our communities," he explained. "The temporary jobs, the noise, the sight of windmills, the destruction of land, the implications to people and wildlife, the implications to our existing way of life, and all the financial benefits going to the company and its partner are all good sound reasons for us to reject this proposal."

The Lake Talon Conservation Association (LTCA) also raised concern for preserving the rich history of the Mattawa River system, which was recognized as a Canadian Heritage River by the Government of Canada in 1988 for its historical significance.

Within that surrounding area, they said the Innergex project would wreak havoc on the wildlife and threaten the longstanding historical presence that the area has.

But they also questioned the choice of location, citing the comparatively low wind intensity in the area as a suspicious decision.

As far as the LTCA is concerned, the developers are being told by the Provincial Government to focus on Crown Lands and unorganized townships in order to limit the resistance and local government opposition.

The Conservation Association also brought attention to the overall declining electricity demand, the protection of Samuel de Champlain Provincial Park, and the negative impact on snowmobiling and ATVing in the area.

“This isn’t the place or the time,” said Brian Baker, the Association’s communications officer. “We question the need; there’s just no proven need for more energy capacity here. It’s been on the decline for years and the government is spending over $100 million in January alone to sell its surplus of energy.”

Other residents with a vested interest in the area raised concern for the visual pollution of the turbines, the various health hazards associated with the low frequency sounds they emit, and the adverse impact on the area’s tourism, among a list of others.

François Morin, senior advisor of public affairs for Innergex, was on hand for the public consultation to address the public concerns, of which he said there were no surprises.

He also took to the microphone to reassure everyone that the project is still in its infancy and that Monday night was merely the first step in what he hopes will be a productive dialogue process with the public.

“Tonight is a success because people got out of their home, came here and gave us their feedback,” said Morin. “Now, it’s our job to take that feedback to improve our project, maybe propose solutions, and continue the dialogue that we started tonight.

“It’s a tough job to do, but it’s our job to restore that trust and engage in an efficient, open dialogue with them,” he added.

Morin said if the project moves ahead as planned, the earliest they expect to see construction begin is 2019.

What are your thoughts? Does Innergex have the right idea or should the proposal be turned down?