KidSport North Bay’s 50/50 draw is now OPEN! Someone is going to take half of the jackpot, and it could be YOU! Proceeds benefit Canadore Foundation, One Kids Place, Hands - The Family Help Network, KidSport North Bay.
Oct 16, 2020 11:00 AM By: Chris Dawson 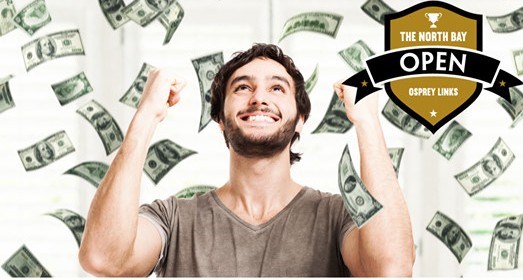 A number of local charities have joined forces with KidSport.

The North Bay Open, which is an annual charity golf tournament that benefits One Kids Place, Hands - The Family Help Network, KidSport North Bay along with the Canadore Foundation - is now connected with a new and unique KidSport North Bay 50/50 draw.

"It did not take us too long, three to four weeks from concept to execution and it was bringing the four charities together to raise money for each," said Scott Clark, community representative for the event.

He realizes the bigger the pot, the more interest will be there for tickets to be purchased.

"What we are trying to do is promote this to see if we can get the same sort of traction that Sault Ste Marie had, that would be knocking it out of the park," sai Clark.

"At the end of the day, KidSport will receive all the money, they distribute it and buy things for the other charities that they will require throughout the year."

Clark believes events like this are important for organizations due to the fundraising challenges of 2020.

"I think with a lot of charities, a lot of them are pivoting," he said.

"A lot of these charities, their biggest fundraisers that are part of their budget line items to keep the organization rolling along and keeping the different services running. Those large fundraisers are not happening, so all of them have had to adjust one way or another and try and pivot and figure out different ways in which to reach people, reach their audience, and help support their organization during this time.

"Costs for these programs are not changing, they continue to deliver their programs and they are generally more expensive during the pandemic."