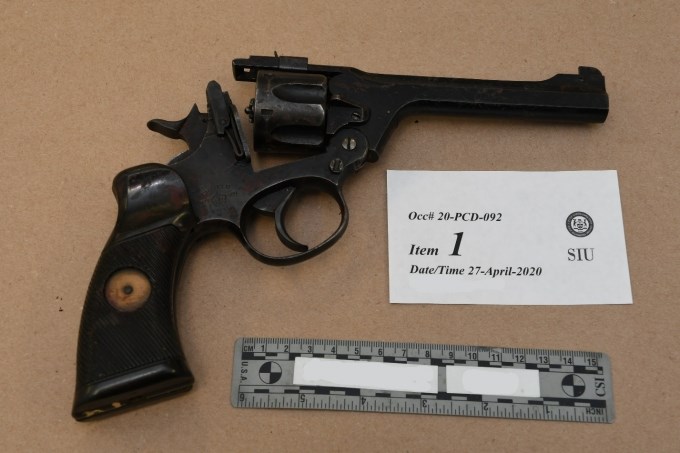 The Enfield .38 calibre handgun found at the scene. Supplied.

A Special Investigations Unit report today says it finds no wrongdoing of OPP officers sent to arrest a man in an Elliot Lake probation office, who shot himself to death.

On the morning of April 20, 2020, a 49-year-old man went to the Elliot Lake Probation and Parole Office for a scheduled meeting.

A few minutes later, two OPP officers arrived to arrest the man for having breached a condition of a prohibition order not to be in the presence of anyone under the age of 16 unless in the company of an adult approved by the court. He had earlier in the month been seen in the company of a woman and her two children at a Shoppers Drug Mart store

When the man learned he was about to be arrested, he became agitated and asked that the officers not enter the room he was in. From behind the closed door to the room, the officers told him that would not be possible as he was under arrest. Shortly thereafter, the man retrieved a handgun from his waistband, held it up to his chin and pulled the trigger.

Officers who had drawn their own firearms at the sight of the man's handgun, entered the room, and administered life-saving measures. Paramedics arrived but he could not be saved.

He was pronounced dead at the scene.