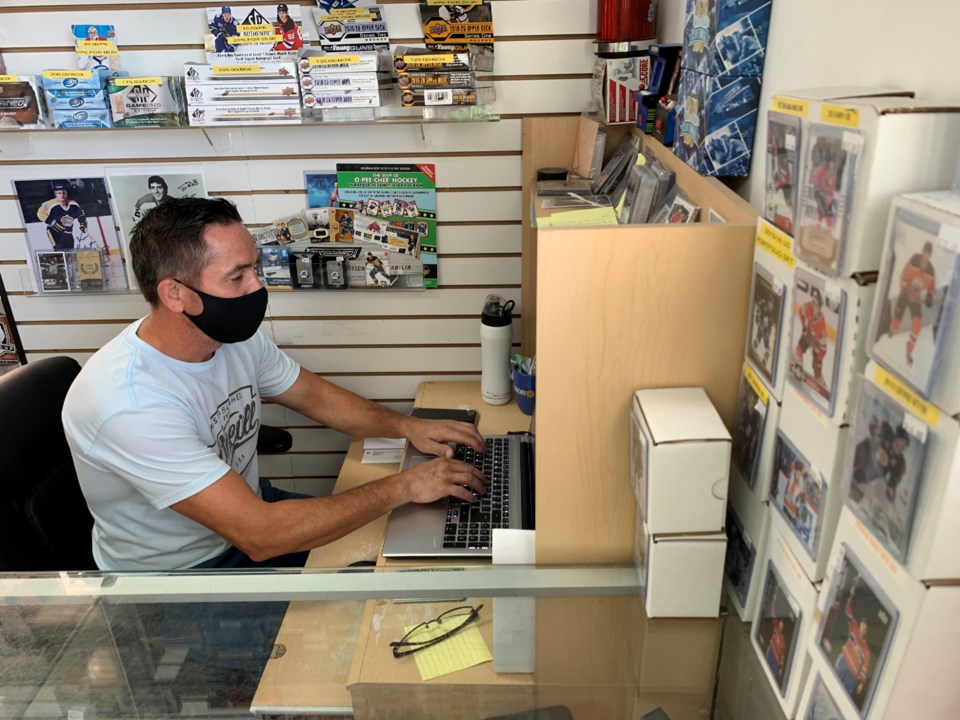 Rob Collins of Ultimate Sportscards, does some work on the internet. Photo by Chris Dawson/BayToday.

Rob Collins believes he is in a unique and fortunate situation.

While many businesses struggled to manoeuvre around the challenges of operating during a pandemic, Collins business was able to flourish.

The North Bay area entrepreneur has been operating Ultimate Sportscards, a sports card business in North Bay for more than 20 years now.

Surprising to say, Collins believes business has never been better despite the pandemic.

"All the hobbies, basketball, football, and baseball and hockey have definitely grown during the pandemic," Collins told BayToday.

"With everybody locked down and not able to do much they just went on the internet."

Collins does admit he did need to lay off two staff workers who worked in the storefront of the Cassells Street business. He has been able to bring them back with the Stage 3 provincial re-opening which allowed him to have patrons in his store for the first time since March.

However, what kept Collins so busy operating the business was his online sales through platforms such as eBay.

"We were thankful that we took the plunge 12 years ago and went online and now we have a huge online store which really benefitted us at a time when everyone was home shopping online so it definitely benefitted us and worked out for us for sure," he said.

Of course, Collins is not alone in this success as the entire industry is on a huge upswing.

"If you follow anything in the sportscard world it is becoming an investment now is what it is," said Collins.

"People are buying stuff and it is just becoming an investment so the hype is so great right now. We have never seen it like this ever."

He says the sports void which was filled with classic games on TV benefitted the industry as well.

"The Mario Lemieux's and the Steve Yzerman's, Wayne Gretzky, Patrick Roy, Ray Bourque; everybody started to buy these things over the past five months," admitted Collins.

"I don't think I've sold any of their rookies in the past couple of years but in the last few months we have sold all their rookies; everyone from the 80s and 70s because of all these old classic games and I think that generates a lot of interest for people. We are seeing a spike in interest in the vintage era for sure. So it is good to see the new and the old stuff blending together. I even have young people asking for those retired players so it is just neat."

While business was good during the pandemic, Collins says he is so happy to see customers allowed back in his store again.

"During the early stages of COVID-19 I was not open but the online world was open and that was great," he said.

"Now that Stage 3 is here and we are allowed to be open it does feel great to see the regular customers back and I think they were all waiting to come back.  However, you do not see the amount of in-store customers you used to see like we would have back in February for example.  We have had a lot of southern Ontario traffic coming through camping so we have seen a lot of them recently. So opening up is great on some aspects but on the other hand, the online is super strong, very strong online."

The fact that live NHL playoff hockey has returned is more good news for his business.

"I think having hockey back will add to the hype that is already going on. It will be interesting how much more it will generate for the industry," said Collins.

Ontario changes COVID-19 testing guidance, shifts focus to symptomatic testing
Sep 24, 2020 12:01 PM
Comments
We welcome your feedback and encourage you to share your thoughts. We ask that you be respectful of others and their points of view, refrain from personal attacks and stay on topic. To learn about our commenting policies and how we moderate, please read our Community Guidelines.