"I'll invest in higher quality ingredients and not bother paying to put our name on the pizza boxes. Why pay for ink when I could put it back into the food?"
Jun 15, 2020 2:58 PM By: Mike Anthony 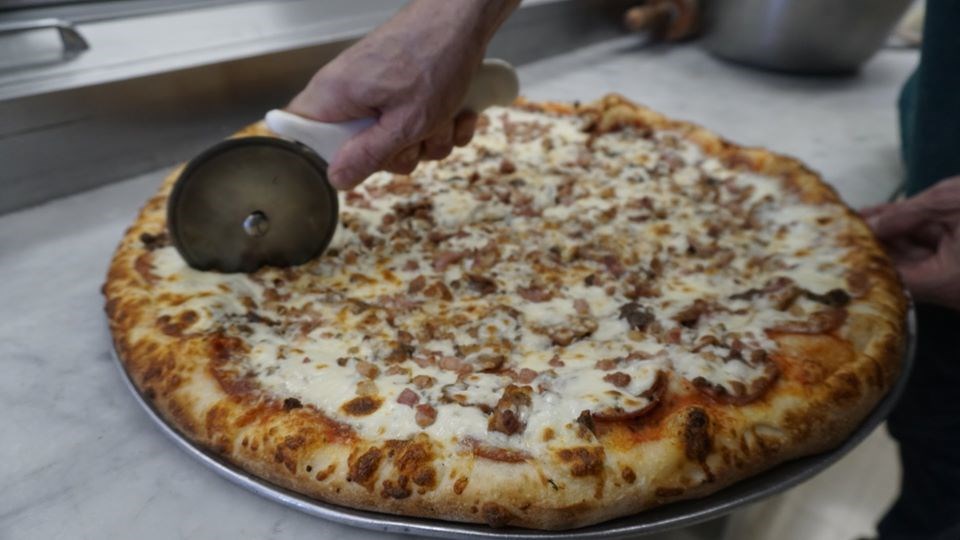 Slicing up a hot, fresh pizza right out of the oven, at Dr Pizza.

This is one in a series of articles in the feature called "Let's Eat" which focuses on the local food and dining scene. This time we touch base with the owner of Dr Pizza at 1495 Seymour Street in North Bay.

Mark Trudel has a passion for Pizza. He opened his own shop, Dr Pizza back in 1996, and is now in the 24th year of operation. He's had the same location since day one.

"We've been here since '96. the building was just being built so I approached the owner and was essentially the first tenant. We're in the same strip mall building that has CTS Canadian Career College," says Trudel.

He's a North Bayite, but had cooked in Toronto for several years before returning home. He says he was lucky to work at three very well-known Toronto pizza places, for a few years each. He learned different techniques and styles that allowed him to bring them home and combine them, along with his own recipes, into what he thought was the best pizza he could offer.

Trudel laughs now when he says he originally thought he would be open, and be financially set in a year or two. It was a lot more hard work than that and took several years to get the level of success and continued business he enjoys know.

"In the beginning, I had most family and friends helping me - many volunteering. It was hard work, but it paid off, and North Bay has been very good to me, I'm very thankful," he adds.

These days, along with himself he typically has a staff of three - he's running with two right now and in the process of hiring the third when he finds the right fit.

For his clientele, he finds what works is sticking to classic ingredients and avoiding the trends that come and go from year to year, like stuffed crusts or non-meat "meat." He finds his success comes from working with the classics, although he's always willing to learn new things if he sees they fit with his menu.

Trudel has always been a delivery and take-out business, so he says the COVID-19 situation didn't have that large an impact on Dr Pizza. In fact, over the weeks, he found that his dinner business actually increased during the pandemic.

"We saw many new customers so we were fortunate. My heart goes out to all our colleagues who are struggling through this. It's not an easy business and I feel for them."

When asked what makes Dr Pizza different, Trudel takes a moment to gather his thoughts before answering.

"A few things. First our open-concept kitchen. If you come in for pick up you literally see every single thing we do to your order because we're proud of the cleanliness and how we operate. Next would be the quality of our products. For example, I'll invest in higher quality ingredients and not bother paying to put our name on the pizza boxes. Why pay for ink when I could put it back into the food," he explains.

Dr Pizza;s menu goes beyond pizza to include wings, a variety of pasta, subs, salads, wraps, and more.

At his shop, Trudel says there's no question the most popular pizzas are the Deluxe, and the Meat pizzas. He says his next three typical top sellers are usually the panzerotti, the meatball sub, and the Greek salad.

And what's the prescription for the Doctor himself? Trudel says his own custom-made favourite pizza consists of pepperoni, mushrooms, green peppers, bacon, green olives, hot sausage, and hot peppers.

This eatery's top ingredients in the recipe for success? Customer service, quality, and value.
Jul 27, 2020 1:00 PM

Popular local eatery cooking its way to better days
Jun 29, 2020 1:00 PM
Comments
We welcome your feedback and encourage you to share your thoughts. We ask that you be respectful of others and their points of view, refrain from personal attacks and stay on topic. To learn about our commenting policies and how we moderate, please read our Community Guidelines.