Bill Walton, The Spanish Flu and the Kawigamog 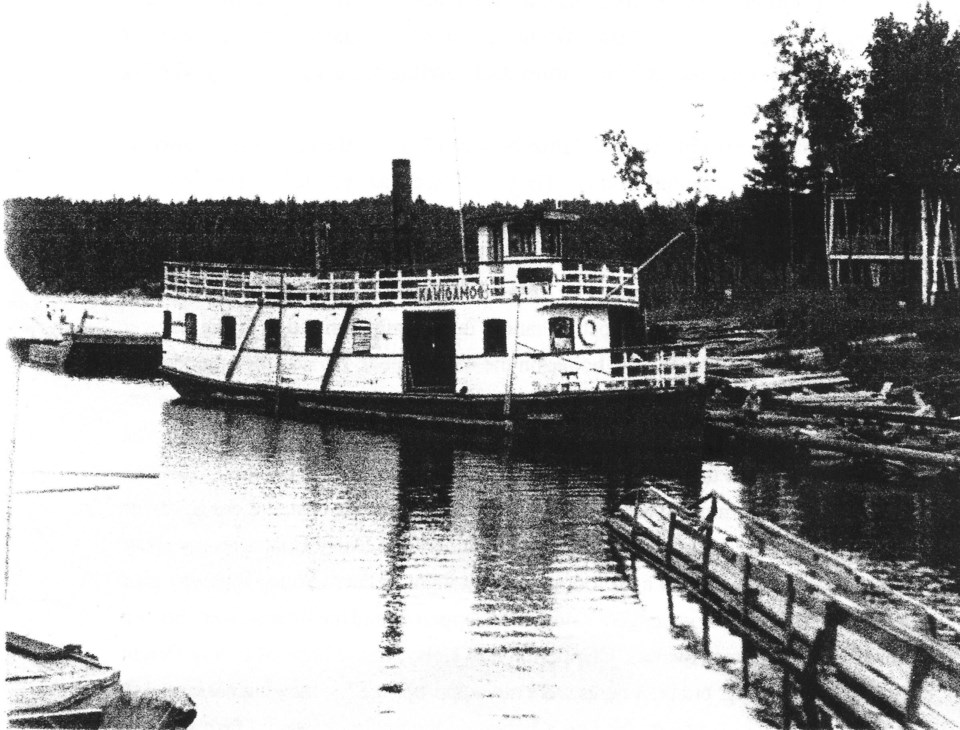 This is my father’s (Aubrey ‘Dob’ Walton 1907 - 1997) account of what happened during the Spanish Influenza of 1918-19 with regards to the operation of the steamer Kawigamog. My great-grandfather, Arthur Walton, and his two sons, Edgar and William, built the Kawigamog at Port Loring. The Kawigamog served people along the Pickerel River for twelve years. Much of its history is recorded in my book about the era: “The Steamer Kawigamog & Pickerel River Tales”. I thought the account of the ‘flu’ might be of interest in our days of isolation – Bill.

The Spanish Influenza epidemic that raced through Europe in the closing year of the Great War reached our area in the fall of 1919. That fall had been particularly cool and wet and these conditions seemed to favour the illness.

There were approximately 2,000 men working in the various lumber camps and mills at that time, many of them in remote cutting camps. When illness struck there was no one to attend them, in fact, even the people at Lost Channel and in the Loring area had to rely on the services of one doctor.  Doctor Ames looked after as many sick people as he could but the flu struck so many that he was unable to offer much time with any one person.

My brother Merrill was the first one of the crew to be struck down with the flu. We were away from home so we just placed him in a bunk on the Kawigamog where Mother and Daisy could keep him comfortable until we could get back home. (My mother and my sister Daisy were on board at this time, running the canteen and cooking meals for the crew.) Four days later my Dad, already weakened by influenza, collapsed at the engine. We were just coming in to land at Bruce's mill.  When Grandpa, Captain Arthur, signalled to stop the engine, my Dad was so weak he fell when he reached for the lever. The Kawigamog banged into the dock, which fortunately was just made of slabs and sawdust, so no damage was done to the bow.

Maurice Maloney of Sundridge had taken over the firing of the engine when Merrill became ill, and with his help, we placed Dad in a bunk. I was working as deckhand that trip as all the able-bodied men in the area were either working in the camps or replacing someone else who was ill. The Kawigamog now had a crew of three men and two women. Captain Arthur, who would be seventy-one at this time, had two youngsters as crew; Maurice, who was a little older than I, was the fireman, and me, a 12-year-old, who was appointed Engineer!

Granddad used special signals for me and I ran the engine for four days until Uncle Edgar, who was running the Stanley Byers steamboat at the time could take over and run the engine until Dad recovered.  But during these four days, the three of us ran trips, picking up men and taking them to the temporary hospital at Lost Channel.

One day we landed at the Schroeder Mill Warehouse to find 22 men waiting in the cold warehouse. They had been brought out from the camps and just left there, knowing that the Kawigamog would be stopping.  These men were so weak that they had to be helped aboard and some could not even walk. The men were too heavy for us to carry so Maurice and I took an old grey blanket from the cabin and rolled the men onto it then dragged them to the deck of the Kawigamog. We placed them side by side on the deck and made for Lost Channel.

One of the men was dead when we arrived.

Mother and my sister Daisy nursed Dad and Merrill as best they could. They found that by keeping the men cool with wet compresses seemed to offer the most relief. When Dr. Ames dropped by, he was surprised to see how effective this was and soon recommended this for all his patients, both those in the hospital and at home.

The Spanish Flu reached people far into the forests of northern Ontario. Covid-19 may do the same.